AMES, Iowa – The Iowa Board of Regents has approved Benjamin Allen as Iowa State University’s interim president, effective May 9. Allen will serve as senior policy adviser at Iowa State from April 17 to May 8.

Allen succeeds President Steven Leath, who has accepted the presidency at Auburn University. Leath’s last day at Iowa State will be May 8. Allen will remain in the interim position until a new president begins.

Board of Regents leaders have authorized Executive Director Bob Donley to hire a search firm, establish a search committee and determine a process and timetable to identify Leath’s permanent successor.

“It is indeed an honor to be asked to serve as interim president of Iowa State University, a leading land-grant university on a steep upward trajectory, and a place (my spouse) Pat and I care deeply about,” Allen said in a statement issued by the board. “I appreciate the opportunity to serve the university, the Board of Regents and the state of Iowa. We especially look forward to meeting and serving ISU students.”

President Leath noted, “Ben is a great choice to lead Iowa State through this time of transition. He has deep ties to the university and is a beloved member of the Cyclone family. I look forward to working with him on a smooth transition that ensures Iowa State’s momentum and progress continue.” 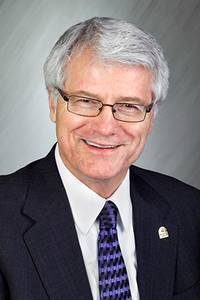 A familiar face on the ISU campus and in the Ames community, Allen held key faculty and administrative roles over three decades. He joined the Iowa State faculty in 1979. He became chair of the department of transportation and logistics in 1984, and was named the first Distinguished Professor in business in 1988. That same year, Allen and a colleague from the University of Iowa established the Midwest Transportation Center (now InTrans) at Iowa State. Allen directed that center for two years. He served as interim dean (1994) and dean (1995 to 2001) of Iowa State’s College of Business. He was interim vice president for external affairs from 2001 to 2002, and ultimately served as vice president for academic affairs and provost from 2002 to 2006.

Allen then led the University of Northern Iowa as its ninth president from 2006 until his retirement in 2013. Under his leadership, UNI increased undergraduate student achievement and provided statewide leadership in pre-K through 12 education, including the university’s role in the Iowa Mathematics and Science Education Partnership. Allen served as co-chair (with Lt. Gov. Kim Reynolds) of the Governor’s STEM Advisory Council.

Since his retirement, Allen and his wife, Pat, have made their home in St. Louis. As interim president of Iowa State, Allen will relocate to Ames, but will not live at the Knoll, ISU’s presidential residence. His annual salary will be $525,000.

“Returning to Ames, one of the best college towns in America, and to Iowa State, where I spent so many years as a faculty member and administrator, is very special,” Allen said. “I look forward to working with the leadership team, the Faculty Senate, the leaders of the Professional and Scientific staff and Merit staff, student leaders and alumni during this time between presidents to ensure the continued success of the university.”

Allen received a bachelor of science (1969) in business/managerial economics from Indiana University, Bloomington; and a master’s (1973) and doctorate (1974) in economics from the University of Illinois at Urbana-Champaign.

Steven Leath, who was named Auburn University’s 19th president on March 20, will finish his Iowa State presidency on May 8.

“Thanks to President and Mrs. Leath, and the leadership team of the university, Iowa State is in an excellent place with record enrollment and fundraising, growing research expenditures, and the highest graduation rate in the university’s history, among other accomplishments,” Allen said. “I look forward to working with the outstanding faculty and staff at Iowa State to keep moving the university forward as the Board of Regents searches for a permanent president.”

Allen joined the Iowa State faculty in 1979 and became the university’s first distinguished professor in business nine years later. He was dean of the ISU College of Business from 1995 to 2001 and became vice president for academic affairs and provost in 2002. Allen received his bachelor’s degree in business/managerial economics from Indiana University in 1969. He earned his master’s (1973) and Ph.D. (1974) in economics from the University of Illinois.

“The appreciation that Pat and I have for Iowa State has not waned with time; in fact, it has only grown. We spent most of our professional lives in Ames and developed many life-long friendships. We look forward to developing even more friendships with members of the Cyclone family as we engage with Iowa State University and the Ames community once again.”

The Board also authorized Executive Director/CEO Bob Donley to begin the search for the next president of Iowa State. Donley, in consultation with Board leadership, will establish the process and timetable for the search, including the hiring of a search firm and the creation of a search committee. Donley will report on the status of the search at the April 19-20 Board of Regents meeting at the Iowa School for the Deaf in Council Bluffs.