MASON CITY – A man accused of sex crimes against a little girl cried as his prison sentence was handed down today.

Daniel J. Wigant, age 25 of Clear Lake, faced four serious charges which were brought against him in August of 2015 by Clear Lake police: Two counts of lascivious acts with a child and two counts of second degree sexual abuse. Wigant was accused of sexual contact with a female child just 4 years of age. He was accused of molesting the child on July 10 and again on July 16 of 2015.

Wigant initially entered a not guilty plea and was represented by public defender Susan Flander. He was to face a jury trial on November 17, 2015 and remained locked up in the county jail on “special status” on $70,000 cash-only bond.

However, after much legal negotiations took place, a court hearing was held in June and Wigant entered guilty pleas to two counts of lascivious acts with a child, both class C felonies. He had been offered that plea deal months ago but resisted taking it. Wigant awaited a sentencing hearing scheduled for August 8 and stayed in jail until today when that hearing was held.

The child victim’s mother told NIT after the guilty pleas that “I hope he rots in hell for what he did to my child and that no other parents or child goes through this ever.”

A source close to the case also told NIT that as soon as Wigant got to jail he was moved to protective status because he “had a couple run in with guys at the jail… his first night there he got moved because the guys (found) out why he was there.”

It soon became apparent that the jail was not a safe place for Wigant, even on “special status”. Wigant was assaulted earlier this year by John Daniel Murphy, who was charged with a felony for the attack. Murphy later took a plea deal to a lesser charge of assault.

Finally, at today’s sentencing hearing, Wigant was sentenced to 10 years in prison on both counts of lascivious acts with a child, to be served concurrently. He will serve life on the sex offender registry, NIT is told.

Wigant attended today’d hearing in person and cried when the sentence was handed down, spectators told NIT.

Also in attendance was the victim’s mother and biological father.

“I was so happy but overwhelmed at the same time,” mom told NIT.

Wigant remains in the county jail, awaiting transport to prison. 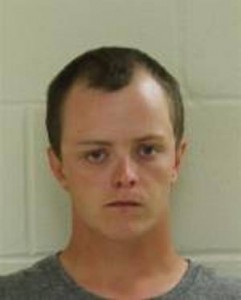