ROCKFORD, IOWA – A Rockford man allegedly struck a female, then fled the scene as police joined in a pursuit.

Jason Gene Weitzel, age 38, remains in the Floyd county jail at this time after an allegedly violent incident. Floyd county law enforcement says that deputies were called to a residence in Rockford on March 6 for a domestic incident where a woman was said to be injured. Weitzel fled the scene in a vehicle, and deputies and state troopers were put on alert to locate him.

After a tumultuous pursuit, Weitzel was stopped and arrested. The following charges were brought against him: felony domestic abuse involving strangulation, threat of terrorism, possession of methamphetamine, carrying weapons, first offense operating while intoxicated, failure to yield to an emergency vehicle, no proof of insurance and more. 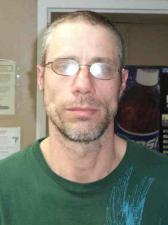