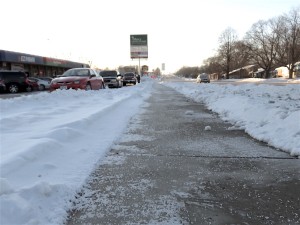 4th Street SW, where the deceased was found

MASON CITY – Mason City police confirmed that a woman was found dead on a sidewalk along a busy street.

Police offered no details on the deceased woman. They did say that she was found unresponsive in the evening of January 7 on sidewalk of 1400 block 4th Street SW, near the strip mall containing Papa Murphy’s and EZ Pawn.

No foul play or second party involvement is suspected at this time.

Police tell NIT that the medical examiner is running a toxicity screen and an autopsy will be done “to rule anything else out”. They say results may take some time to gather before official cause of death is declared.

Police say they are “not sure if family has been contacted yet” so the deceased name and other details were not released at this time.