This news story was published on July 23, 2015.
Advertise on NIT • Subscribe to NIT

MASON CITY – Police were called to a Mason City residence after a report of a domestic situation.

Jonathan Lee Halverson was arrested by Mason City police on July 12 on charges of second offense domestic abuse assault, second degree burglary (a felony) and obstruction of emergency communications after the altercation with a female victim.  A no-contact order was set by a judge.

Halverson posted bond on July 21 and was released from jail.  Later that day via social media, Halverson said “IM NOT GUILTY”. He awaits a July 31 hearing.

He was also found guilty of disorderly conduct in Worth county on July 16 and was sentenced to four days in jail and ordered to pay $420.00 in fines and court costs.  However, Halverson filed an appeal on July 20 in that case. 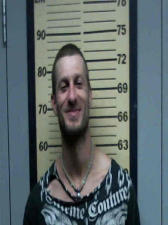