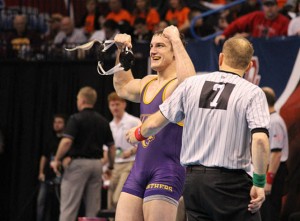 OKLAHOMA CITY – Five Panthers still have a shot at a national championship, while two more are in the hunt for third place.

Cody Caldwell (174 pounds) knocked off the No. 8 seed Cody Walters of Ohio in a 9-6 tiebreaker decision to advance. Caldwell avenged a loss from earlier in the season when Walters beat Caldwell, 6-1, at a home dual. Caldwell will face No. 9 Elliot Riddick of Lehigh.

No. 1 Joe Colon (133 pounds) was the only Panther to earn bonus points in the first session. Colon grabbed a takedown with about four seconds left to beat Vincent Dellefave of Rutgers, 9-1. He will face Matt Manley of Misouri. He has beaten Manley two times this season. The lastest was at the 2014 MAC championships when he earned a 13-5 major decision.

No. 5 Dylan Peters (125 pounds) will face Tim Lambert of Nebraska after beating Nick Roberts of Ohio State in a 9-3 decision. Peters faced Lambert when he competed unattached last year as a freshman. He is 2-0 over Lambert.

No. 11 Joey Lazor will face No. 6 Chris Dardanes of Minnesota after his 6-0 decision over Sam Speno of North Carolina State.

No. 10 Cooper Moore will be looking to avenge a loss against No. 7 Pierce Harger of Northwestern. Harger handed Moore one of his six losses of the season at Midlands. Moore’s win today was over Austin Wilson of Nebraska.

No. 15 Ryan Loder and Blaize Cabell were the only Panthers to lose their first matches today. Loder’s 184-pound match went into sudden victory, but Lazarus Reyes of Illinois won, 6-4. Loder will face Jackson Hein of Wisconsin.

Sessions resume at 6 p.m. Thursday with pigtail consolation matches. Then the championship matches will be held, followed by consolation rounds.