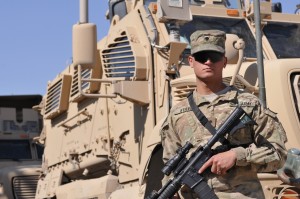 KABUL, Afghanistan – Canada marked the end of more than 12 years of major military operations in Afghanistan during a flag-lowering ceremony conducted at ISAF headquarters on March 12.

Gen. Joseph F. Dunford Jr., ISAF commander, expressed his appreciation for the important role that Canada has played in Afghanistan.

“The Canadian Armed Forces have been a reliable and significant partner in the success of the ISAF mission,” said Dunford. “Canada played a critical role in securing Kandahar Province and had a strategic impact across the country with their contribution to the NATO training mission. Canadian personnel set an example for courage and compassion of which both Canada and NATO can be proud. On behalf of ISAF I extend our sincere thanks and gratitude for Canada’s outstanding service and sacrifice.”

Canada initially committed troops to Afghanistan in 2001 and then returned in 2003 as part of the ISAF mission to conduct security operations in the Kabul area. In 2005, Canada took command of the Kandahar Provincial Reconstruction Team and then deployed combat troops to the south where they engaged in heavy combat and fought alongside their Afghan and coalition counterparts until 2011.

Canada was instrumental in developing a network of roads that have had a lasting impact on the residents of key districts in Kandahar Province by improving economic conditions and extending the reach of governance.

Senior Canadian officers have also held many notable positions within ISAF, including that of ISAF commander from February to August 2004 as well as Commander Regional Command South and Commander NATO Training Mission-Afghanistan.

More than 40,000 Canadian service members deployed to Afghanistan between 2001 and 2014. While their military mission will come to an end, Canada will continue to play an important role in Afghanistan’s future through the provision of $330 million to help sustain the Afghan National Security Forces.