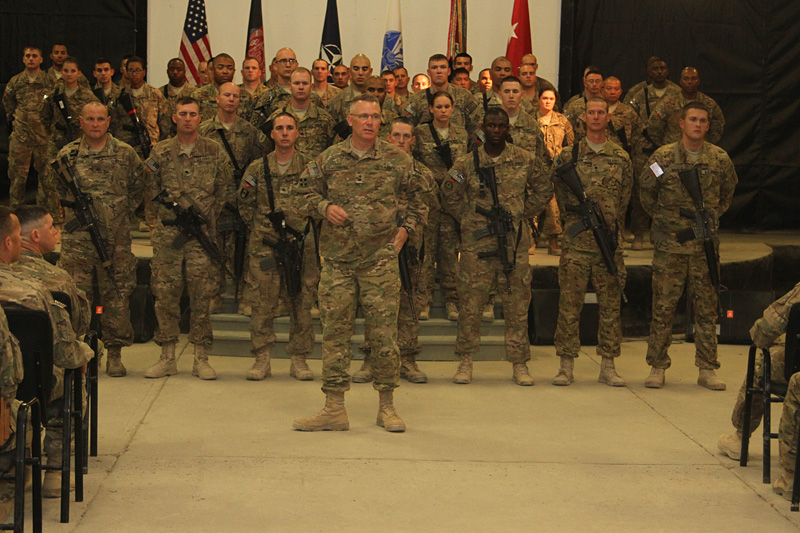 KANDAHAR AIRFIELD, Afghanistan – More than 50 deployed soldiers reaffirmed their allegiance to support and defend the Constitution of the United States during a Regional Command (South) mass re-enlistment ceremony at Kandahar Airfield, Afghanistan, Oct. 11, 2013.

Maj. Gen. Paul J. LaCamera, 4th Infantry Division and RC(S) commanding general, presided over the ceremony and recited the oath of enlistment for the soldiers to repeat.

Before reciting the oath, LaCamera addressed the soldiers and those in attendance supporting them. He noted that 54 soldiers signed up for 161 years of additional service.

He also talked about reading informational cards about the soldiers. LaCamera said that to him, “the most powerful information that they provided was their goals.”

“People want to be doctors, people want to get educated, own their own restaurants,” he said, adding that a couple of soldiers wrote that they wanted to one day become sergeant major of the Army. “But every one of them had a goal and every one had a dream, so I applaud (them) for that.”

Some of the soldiers said a big impetus for re-enlisting was the job security the Army provides.

“It’s a good stabilizing job and it’s something I like to do,” said Staff Sgt. Steven Ponce, a San Jose, Calif., native, who is with Headquarters and Headquarters Battalion, 4th Inf. Div.

Specialist Zachary Flores, a generator mechanic for the 15th Sustainment Brigade who is from Las Cruces, N.M., said there was much left for him to accomplish in the Army.

“I didn’t get done what I wanted to get done the first contract,” he said, adding that the Army Physical Fitness Test was one of the things he would work on. “I want to hit 300-plus on the APFT.”

Others spoke about reaching a certain rank.

“I’m re-enlisting so I can become a noncommissioned officer,” said Spc. Patrick Vernon, a utilities and equipment repair specialist with the 15th Sustainment Brigade who is from Midland, Mich.

Sergeant Armenio Dossantos, an aircraft section sergeant with 1st Infantry Division, said he re-enlisted because he enjoys his job – specifically working on CH-47 Chinook and UH-60 Black Hawk helicopters. He also said it was an honor to re-enlist while deployed in Afghanistan.

“We’re in a war zone and we’re making an additional commitment to serve,” said Dossantos, a Colorado Springs, Colo., native. “It demonstrates commitment to our country.”

For Staff Sgt. Tammi Lewis, who is with 6th Cavalry Regiment, the ceremony represented her third time re-enlisting while serving overseas. She first re-enlisted in Iraq, then in South Korea and now in Afghanistan.

“It’s great that the Army gives me the opportunity to re-enlist three times,” said Lewis, a Tampa, Fla., native. “I love my job. It’s a great opportunity to spend another six years in the Army doing what I love.”

In addressing the soldiers, LaCamera gave advice about accomplishing goals.

“I tell you, don’t ever give up on them,” he said, adding that their goals and dreams may change down the road. “When you get knocked off your horse, you get back up.”

He also talked about how U.S. service members, including those re-enlisting, have helped impact Afghanistan over the years.

“We’re all here because of the hopes and dreams that we hope to give to the Afghan people. When we first came to this country, the average life expectancy of a male was 37 years old. Now it’s somewhere around 50, 55.”