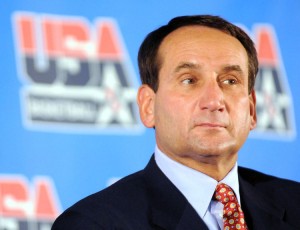 He had said that the 2012 Games iin Brazil would be his last as Team USA coach.

“It is tough to give up something you’ve absolutely loved doing for seven years, the people you’re doing it with, and most importantly, the country you’re doing it for,” Krzyzewski said. “As a result of my ongoing desire to coach, I’ve decided I’d like to continue as head coach of the Men’s National Team especially since USA Basketball wanted me to do so. It just seems like the right thing to do.”

Krzyzewski, 66, has coached at Duke for 33 seasons after five seasons at his alma mater West Point, amassing a record 957 wins against 297 losses. Duke has won the NCAA Tournament four times since Krzyzewski became coach there in 1980.

“There is no greater honor than to coach your country’s team and to be afforded the unique opportunity to be the National Team coach three times is incredible,” said Krzyzewski. “I do not take that responsibility lightly. Working with the people at USA Basketball, particularly (USA Basketball Chairman) Jerry Colangelo, has been remarkable.”