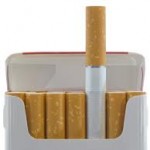 Study co-author Gregory Connolly, director of the Center for Global Tobacco Control at the Harvard School of Public Health, said one year after the federal government passed a law banning word descriptors such as light, “mild,” and “low” on cigarette packages, smokers can still easily identify their brands because of color-coding that tobacco companies added to light packs after the ban.

“The tobacco industry was found guilty by a federal court in 2006 for deceptively promoting ‘light’ cigarettes as safer after countless smokers who switched to lights died prematurely, thinking they had reduced their health risks,” Connolly said in a statement.

After the U.S. Surgeon General’s 1964 report found cigarette smoking causes disease, tobacco companies began marketing light cigarettes with ventilation holes that allowed air to mix with smoke, which the companies said would limit the amount of smoke a person would inhale, Connolly said.

However, a 2001 National Cancer Institute report found smokers compensated for the lower smoke yield in light cigarettes and ingested as much tar and nicotine as regular cigarettes — by smoking more intensely, more often, or by blocking the ventilation holes with their fingers or lips.

The study was published online in Tobacco Control.