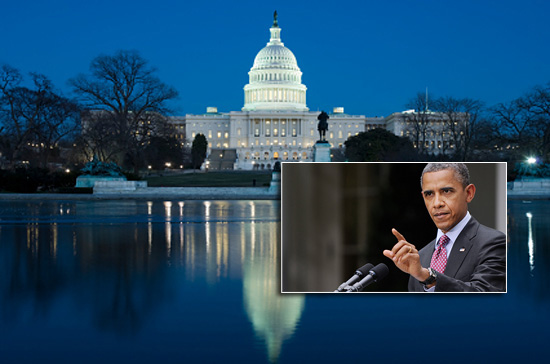 Appearing with emergency responders at the White House, Obama urged Congress to pass — at the very least — a short-term measure that would delay the cuts so lawmakers could work on a permanent fix.

If nothing is done, $85 billion in spending cuts — called sequester — will go into effect March 1.

“Our top priority must be do everything can to grow economy and create good middle-class jobs. That has to drive every decision we make,” Obama said. “It’s troubling that just 10 days from now, Congress might allow … automatic, severe budget cuts that will do just the opposite.”

The across-the-board cuts were put into play by the last-minute debt ceiling deal reach in August 2011 and the “fiscal cliff” agreement enacted at the beginning of this year.

Obama said Tuesday the government can achieve $4 trillion in deficit reduction economists say is needed, but for that to happen, there must be a balance of tax reforms and spending reforms.

“If Congress allows this meat cleaver approach to take place, it will jeopardize our military readiness … [and] eviscerate job-creating investments in education and energy and medical research,” he said. “It won’t consider whether we’re cutting some bloated program that has outlived its usefulness or a vital service that Americans depend on every single day. It doesn’t make those distinctions.”

Obama said the sequester would result in, among other things, reduced border patrol staffing, degraded first response capability in emergency situations, a furlough of FBI agents, layoffs of teachers and educators, air traffic and airport security cutbacks and loss of access to healthcare for hundreds of thousands of Americans.

“These cuts not smart … not fair … [and] hurt the economy,” Obama said. “People will lose their jobs.”

Congressional Democrats and Republicans have come up with plans to avert the sequester, but “so far at least, the ideas the Republicans have proposed ask nothing of the wealthiest Americans or [the largest] corporations,” he said.

“It’s wrong to ask the middle class to bear the full burden of deficit reduction,” the president said.

If such a bill reaches his desk, “I won’t sign it,” he said.

Congressional Republicans face a “simple choice,” Obama said. They either are willing to compromise or put jobs and the economy at risk “to protect few special-interest tax loopholes. That’s the choice.”

Obama said, as he did in his State of the Union address last week, deficit reduction alone “is not an economic plan.”

He said his door is open and that he’s put tough cuts and reforms on the table.

“None of us will get 100 percent of what we want,” he said adding that “nobody should want these cuts to go through” and inflict pain on the economy and the public because of “partisan recklessness and ideological rigidity.”