As Romney shifts to the center, Ryan steps back 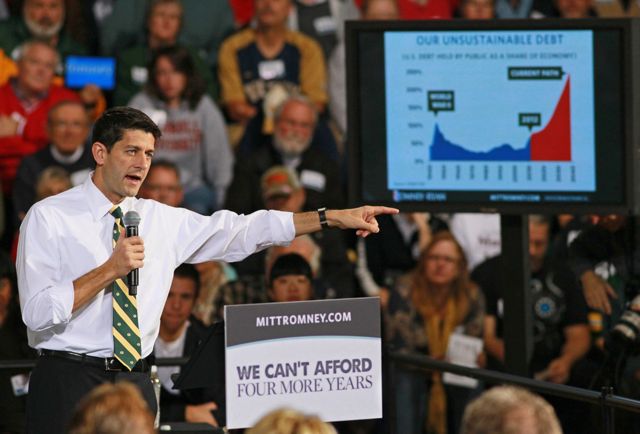 The crowd wanted the man at the top of the ticket, and as Romney began to speak, Ryan moved to the back of the stage, clapping on cue, looking a bit like the nice neighbor from down the street.

Moments like this, which took place Friday night on a high school football field, are in keeping with Ryan’s recent lower profile, which contrasts sharply with his first days on the campaign trail. Then, the young Wisconsin congressman was getting more applause than Romney, who was limping along in the polls. Ryan was being described as the new face of the Republican Party — and the conservative jolt that Romney needed.

But somewhere along the way, Ryan became less prominent as Romney’s message shifted from conservatism to bipartisanship.

“There’s sort of a dance that they have to play — Romney’s moving in a direction towards moderation that’s away from Ryan,” said Joel Goldstein, an expert on the vice presidency who teaches at the St. Louis University School of Law. “They’re trying to appeal to demographics where Ryan’s positions would hurt them, but by the same token, they can’t bury him because he’s on the ticket, and a big part of the base likes the fact that he’s on the ticket.”

Over the weekend, Ryan crisscrossed Ohio on a bus tour of nine small towns, avoiding controversial topics and staying on message. In the five stops he made solo, he appeared before crowds of 800 to 1,500 supporters, far smaller turnouts than the adoring masses Sarah Palin drew as the GOP vice presidential nominee in 2008.

He was demoted Sunday from featured speaker to warmup act after Romney canceled events because of Hurricane Sandy and rerouted his campaign to join Ryan’s bus tour for three rallies. Then the crowds became deafening. When Romney appeared onstage at a rally in Findlay, Ryan pumped his hands to rally the crowd and stood behind Romney as he spoke. In his speech, Romney glossed over Ryan’s budget plan and lauded his running mate for working with Sen. Ron Wyden, D-Ore., on a Medicare plan that Wyden has since disavowed.

“He worked across the aisle,” Romney said as Ryan stood behind him, clapping.

Ryan’s agreeable demeanor is probably a relief to Republican staffers after a cycle in which Palin went rogue and was more beloved by some voters than her running mate, Sen. John McCain.

“I haven’t heard much from him, but what I have heard seems intelligent,” said Jackie Timko, a retiree from Wilmington, Ohio, who attended a recent Ryan campaign rally in a gym in Sabina. “But I wish I could see Romney.”

The Sabina rally included about 100 “Alabama Battleground Patriots,” who were bused up to Ohio to knock on doors and ushered into the rally to thank the volunteers — and to fill seats.

“We’re hoping to see Mitt Romney in the White House,” said Tom Dollman, one of the volunteers.

It is not surprising that voters would want to see a presidential candidate more than a vice presidential one. But it’s not just voters who seem to have lost interest in Ryan: His traveling press corps has shrunk to only a few reporters.

Ryan hasn’t necessarily persuaded Romney advisers that he should be front and center, said Goldstein, the professor.

“It seems to me that there have been a number of instances where his campaign has drawn some big negative attention,” he said.

There’s Ryan’s budget plan, which would have changed the way Medicare was administered, questions about the accuracy of many statements in his convention speech, his misstatement of his time in a marathon and his co-sponsorship of a “personhood” bill with Rep. Todd Akin of Missouri.

A Ryan campaign spokesman dismissed the idea that the campaign has put Ryan aside, saying Sunday that the candidate’s crowds have been increasing constantly and that Ryan is consistently outdrawing Vice President Joe Biden in certain communities.

Still, Ryan remains a tough sell for voters such as Richard O’Kane, 59, of Rye, N.H., who calls himself “a classic New Hampshire independent.”

“Ryan represents everything I disagree with,” said O’Kane, who still hasn’t settled on a candidate.