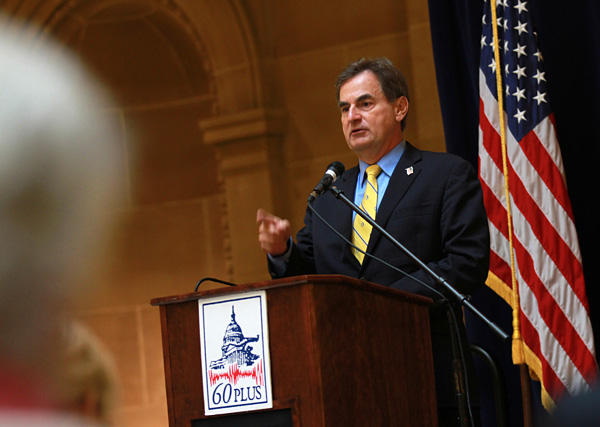 WASHINGTON — In an election that increasingly is a battle for women’s votes, the Obama campaign seized on a provocative claim about abortion and rape by a Republican U.S. Senate candidate in Indiana, arguing that it shows Mitt Romney does not support women’s reproductive rights.

Richard Mourdock’s comment that a pregnancy after rape is “something that God intended to happen” created an unexpected opening Wednesday for Democrats, who called on Romney to denounce the statement. The controversy created an unwanted distraction for the GOP nominee, who had endorsed Mourdock and taped a TV ad for him.

The sudden flare-up not only pushed abortion back into the center of the white-hot presidential race, but also gave Democrats renewed hope of retaining control of the U.S. Senate. Recent polls have found Mourdock and his Democratic opponent, Rep. Joe Donnelly, locked in a tight battle for the seat long held by GOP stalwart Richard Lugar.

“This is a reminder that a Republican Congress working with a Republican president Mitt Romney would (feel) that women should not be able to make choices about their own health care,” Jen Psaki, a spokeswoman for the Obama campaign, told reporters aboard Air Force One.

The Romney campaign said he did not share Mourdock’s views on abortion, but declined to pull his endorsement ad off the airwaves.

“Gov. Romney disagrees with Richard Mourdock, and Mr. Mourdock’s comments do not reflect Gov. Romney’s views,” said campaign spokeswoman Andrea Saul. “We disagree on the policy regarding exceptions for rape and incest but still support him.”

Other Republicans saw potential damage for the party, concerned it could remind voters of Todd Akin, the Republican candidate for the Senate from Missouri. His claim over the summer that women’s bodies can prevent pregnancy in a “legitimate rape” sent his campaign into a tailspin. Akin now trails in a race considered key to Republican efforts to take control of the Senate.

Rep. Mike Pence, the Republican nominee for governor in Indiana, urged Mourdock to apologize. Sen. Kelly Ayotte of New Hampshire, a rising figure in the party, cancelled a planned trip to campaign with Mourdock and told reporters she disagreed what he had said.

Mourdock stood by his comments and said people “mistook” and “twisted” his words.

“If in any way people came away with the wrong meaning, I apologize,” Mourdock told a press conference in Indianapolis. He added, “For speaking from my heart, for speaking from the deepest level of my faith, I cannot apologize.”

The flap could undercut Romney’s recent gains in closing the so-called gender gap. Democrats jumped on Romney’s endorsement of Mourdock as a chance to rally unmarried women, a key demographic that had cooled to Obama after many felt he appeared indifferent to their concerns during his first debate with Romney.

Until Tuesday night’s debate, the Senate race in Indiana had largely focused on partisanship and gridlock in Washington. Donnelly has portrayed himself as a moderate who would work with both parties, while Mourdock declared himself a man of principle, unwilling to compromise on his political agenda.

“When you have two parties whose points of view are so totally different, don’t be surprised when you have gridlock,” Mourdock told supporters in Seymour, south of Indianapolis, earlier this month. “And so, one party has to win this discussion with the American public.”

On Tuesday night, nearing the end of a debate with Donnelly and a Libertarian candidate, Mourdock was asked about his views on abortion in the case or rape or incest.

“I know there are some who disagree, and I respect their point of view, but I believe that life begins at conception,” he said. “The only exception I have, to have an abortion, is in that case of the life of the mother.

“I’ve struggled with it myself for a long time, but I came to realize that life is that gift from God,” Mourdock said, appearing to choke back tears. “And even when life begins in that horrible situation of rape, that it is something that God intended to happen.”

In a press conference Wednesday, Donnelly criticized Mourdock for “his continuation of extreme positions.”

“I think for someone running for the United States Senate it is hurtful to women to survivors of rape and their families to have said this,” he said.