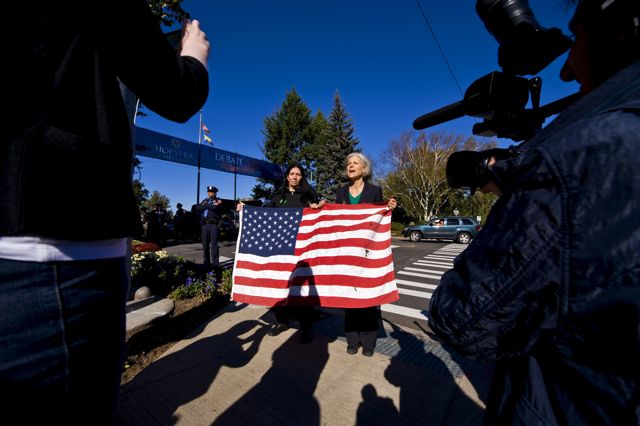 HEMPSTEAD, N.Y. — President Barack Obama’s goal in Tuesday’s debate is to more forcefully challenge Republican opponent Mitt Romney, dramatize the sharp differences between them and erase the memory of his tepid performance in their earlier encounter.

Romney’s task is to build on the progress he made during that first matchup in connecting with the American people. He also has to demonstrate that his conservatism is compassionate and to dispel the notion that he’s a wealthy, out-of-touch patrician.

The “town hall” format used for the 90-minute debate at Hofstra University has potential to suit both of their needs.

Undecided voters in the audience, selected by the Gallup Organization, will ask questions. The candidates could walk around the stage, address the voters directly and talk somewhat less informally. Such formats usually feature questions that call for the candidates to explain their views, giving Obama and Romney a chance to patiently spell out the contrasts.

Candy Crowley of CNN, the first woman in 20 years to moderate a presidential debate, could then follow up and press the candidates for more detail. Both camps were wary that Crowley would get too aggressive.

Though there is one debate remaining, the stakes for this one are unusually high, and both camps were concerned.

Romney is credited with winning the first faceoff Oct. 3, and another stumble by Obama could douse any momentum his campaign spent months to build. The president is still very much in the game, though, as most national and swing state polls routinely show a virtual tie.

About all that’s changed in recent weeks are some of the issues that each has emphasized. The Romney camp has continued to criticize the Obama administration for its handling of the crisis in Libya. Four Americans, including the U.S. ambassador, died as a result of an attack on the American consulate in Benghazi on Sept. 11.

The administration at first said that the incident stemmed from outrage over a video offensive to Muslims, then said it was the work of terrorists. In his debate last week with Romney running mate Paul Ryan, Vice President Joe Biden said that he and Obama were unaware that more security had been needed, though embassy officials said they had sounded warnings.

On the eve of the second Obama-Romney meeting, Secretary of State Hillary Clinton took responsibility for the administration’s handling of the crisis, an effort, perhaps, to provide the president some political cover.

Obama, meanwhile, has continued his own campaign offensive, relentlessly questioning Romney’s proposed 20 percent across-the-board cut in income tax rates. The president maintains it would cost $5 trillion over 10 years, while Romney says his plan would not add to the deficit.

But Romney’s argument took a serious hit last week when the staff of Congress’ bipartisan Joint Committee on Taxation found that even if most popular deductions were eliminated, such changes would only fund a 4 percent income tax cut.

Romney’s campaign fired back before the debate with a barrage of tweets.

“Barack Obama has presided over record debt and the nation’s first trillion-dollar deficits,” said one.

When Obama took office in January 2009, the country was already in the 14th month of a deep recession. He pushed through Congress an $831 billion economic stimulus package.

The Obama campaign is also making an effort to paint Romney as someone who constantly shifts his positions. In recent days, Romney has softened his rhetoric on several issues after spending much of the year trying to paint himself as “severely conservative” in an effort to win his party’s nomination.

He continues to back repeal of the 2010 federal health care law, but he has recently expressed eagerness to work with Democrats.

He told the Des Moines Register last week, “There’s no legislation with regards to abortion that I’m familiar with that would become part of my agenda,” though he remains adamantly anti-abortion in most cases.

Stephanie Cutter, Obama’s deputy campaign manager, wrote to supporters Tuesday: “This is a deliberate attempt to hide and even misrepresent the real positions he’s held loudly and unabashedly during this entire race — a last-minute effort to ‘make the sale’ just like he did in the boardroom to close a deal.”