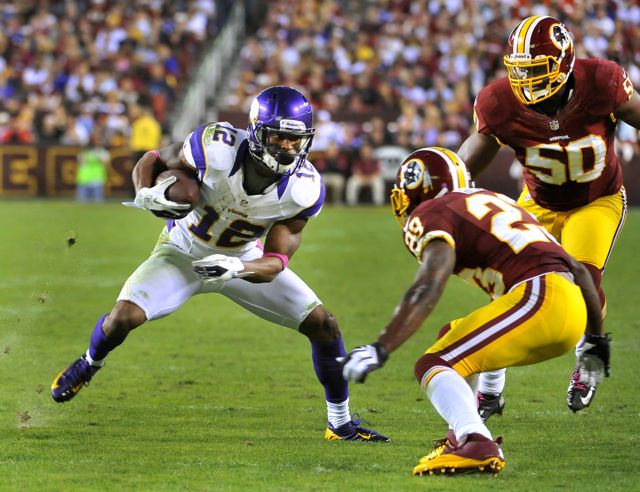 The chants were loud. They were impassioned. And they left the visiting Vikings with a pounding headache.

For three hours, Griffin had all eyes on him yet showed extraordinary poise.

He was sharp with his throws and electric with his runs.

Most of all, he seemed to create an energy within his team and among the boisterous crowd. So much so, in fact, that Vikings star Adrian Peterson congratulated the 22-year-old quarterback after the game and walked away a believer.

“Looking into his eyes, he’s got the heart of a champion,” Peterson said. “It’s easy to see he’s a great player. He’s been blessed.”

Like any grand finale at a David Copperfield show, Griffin’s final trick Sunday appeared as effortless as it was breathtaking.

With 2:56 left, the Redskins clung to a five-point lead and faced a critical third-and-6 at their own 24.

And then came the snap and an aggressive Vikings blitz that never got home.

Linebackers Chad Greenway and Jasper Brinkley were knocked off course. Griffin saw an opening and darted through.

“We were putting a little pressure on him,” Greenway said. “And he escaped. Really nothing more to say.”

Cornerback Chris Cook, in coverage on Josh Morgan, was sealed by a block.

Safeties Harrison Smith and Jamarca Sanford were each a degree or two off in the angles they took in pursuit.

Suddenly Griffin sliced to the left sideline and seemed to hit a moving walkway.

The final 65 yards of his sprint created a celebratory mosh pit across the stadium.

“There aren’t a lot of guys who play that position who can break a 76-yard run and not get caught,” Vikings coach Leslie Frazier said. “That creates some issues for any defense. (He’s) a heck of a young player.”

Early on, Griffin continually pinpointed passes to open receivers cutting toward the middle of the field, a vulnerability in the Vikings defense that the Redskins exploited time after time on four consecutive scoring drives.

Washington also addled the Vikings with heavy doses of play-action and a multitude of zone read looks.

“Sometimes it can be tough,” Greenway said. “It’s a little bit of smoke and mirrors with all their fakes and stuff. … When they’re carrying out the fakes, you’ve got to play the run. And as a linebacker, it’s tough to do both. You’ve got to read your keys and play ball. You’re not going to get them all obviously. So credit them for a good scheme.”

Still, for as electrifying as Griffin’s performance was, the Vikings also left Washington kicking themselves for a flood of squandered opportunities.

The offense marched into the red zone on its first three possessions and, after 13 minutes, held an eye-popping 146-7 advantage in total yards. Yet all three of those drives stalled, resulting in field goals.

“If you go back in time, I’ve said it after at least four games,” Peterson said. “We have to turn those threes into seven. Today it finally came back and bit us.”

The Vikings were also bitten badly by a pair of Christian Ponder turnovers. Ponder’s final stats (35-for-52, 352 yards, two TDs) might look nice in the boxscore. But the fumble he lost deep in Vikings territory in the second quarter positioned Washington for a gimme TD drive: one play, 6 yards.

Worse, Ponder’s interception early in the fourth was returned 24 yards to the end zone by safety Madieu Williams on what the quarterback called “a fluke play.”

It was certainly Ponder’s worst and most costly throw, a good 5 feet over Michael Jenkins’ head.

“The ball just slipped out of my hands, just sailed,” Ponder said.

With that, the hopes of a fourth consecutive win slipped away as well, the evening ultimately punctuated by that Griffin dash and the chants that may still be echoing through FedEx Field.