This news story was published on September 17, 2012.
Advertise on NIT • Subscribe to NIT 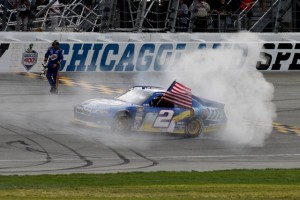 By Jim Utter, The Charlotte Observer –

To win a championship, however, they will have to exceed it.

It’s what Keselowski and team owner Roger Penske have dearly wanted: To come out on top in a head-to-head battle with Jimmie Johnson’s No. 48 Hendrick Motorsports team for a NASCAR race victory.

Keselowski did just that Sunday using a fast late-race pit stop under green-flag conditions to overtake Johnson and then held him off for the win in the GEICO 400 at Chicagoland Speedway.

The win not only gave Keselowski his first Sprint Cup Series win in the Chase for the Cup but also vaulted him into the series points lead for the first time in his career.

“To be able to race side-by-side within two or three seconds for probably almost 100 laps and come out on top is a real credit to (Keselowski’s) driving skills.”

After Sunday’s race, Penske repeatedly referred to Hendrick Motorsports as the “gold standard” in NASCAR of late.

There is certainly plenty of evidence to back that claim, including Johnson’s NASCAR-record five consecutive Cup titles from 2006 to 2011.

Keselowski qualified for the Chase for the first time last season and finished a surprising fifth in the standings, but failed to post a win in the final 10 races.

Sunday’s victory was Keselowski’s fourth this season and eighth of his career. And to start the final nine races of the season, he’ll start from a position of strength rather than from behind.

“There’s no better place to start than in the lead, right?” Keselowski said. “It feels like round one of a heavyweight title bout. You know it’s good to win it, it feels great, but there are a lot of rounds left.

“It’s a good start but there’s a long ways to go.”

Johnson and Keselowski showed early they were the class of the field. Johnson lead a race-high 172 laps, while Keselowski led 76. No other driver led more than six.

Johnson a had a sizable advantage on Keselowski late in the race when the final round of green-flag pit stops got underway on Lap 228.

Keselowski made up significant time on his pit stop and when he blended back onto the track, he came out in front of Johnson and in the lead.

Johnson’s crew chief, Chad Knaus, questioned NASCAR officials whether Keselowski had cut up on the track too early but NASCAR had no issue with the move.

“He did cut up early. It did impede my progress, I had to check up and wasn’t sure where things were going,” Johnson said. “But it didn’t affect the outcome, I don’t believe.

“The way he made quick work in traffic and stretched (the lead) out on me, I’m not sure I would have held him off.”

Keselowski felt he did nothing wrong.

“It’s a policy of merging down the backstretch, off of Turn 2 I think it said specifically in the driver’s meeting, and I feel like that’s what we did,” he said.

“I think NASCAR agreed, as well, based on their no-call.”

From there, Keselowski wided his lead to as much as three seconds until taking the checkered flag.

Hamlin was running ninth but ran out of fuel with two laps remaining while Gordon suffered a stuck throttle and slammed the Turn 1 wall on Lap 188.

“It’s 10 long races and a lot can happen,” Johnson said. “To come out of here in second is a great day. Of course I want to be in Victory Lane, but we’ll take second and go on to the next one.”