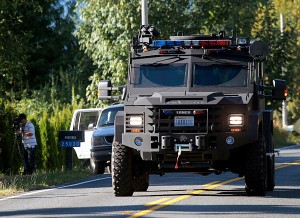 An armored law enforcement vehicle approaches a roadblock at the site of where a sniper in the woods shot a man and then later opened fire on a SWAT team Sunday, September 2, 2012, on Jim Creek Road near Arlington, Washington.

By Craig Welch, The Seattle Times –

SEATTLE — A sniper in the woods outside Arlington, Wash., shot a man in the leg and then apparently opened fire on a SWAT team Sunday afternoon.

A man walking near Jim Creek Road was hit in the leg by gunfire about 1:30 p.m. and “reported hearing multiple gunshots from the woods,” said Snohomish County Sheriff’s spokesman Steve Dittoe.

Within 10 minutes, a SWAT team had arrived and “our armored vehicle was hit several times” by rounds of gunfire, Dittoe said.

He also said the gunman appeared to be firing at passing cars, not just police. It wasn’t immediately clear if authorities believe there was more than one shooter.

Neighbor Linda Purtteman was out walking her dog across the street from her house along Jim Creek about nine miles outside Arlington when she first heard shots .

“I have a few neighbors who go shooting a lot out here, so I didn’t think anything of it,” she said.

Then she ran into a neighbor who told her that a SWAT team had been fired upon and that they were being urged to stay inside and take cover.

“We were told to stay away from the windows, but the whole front of my house is a window,” she said.