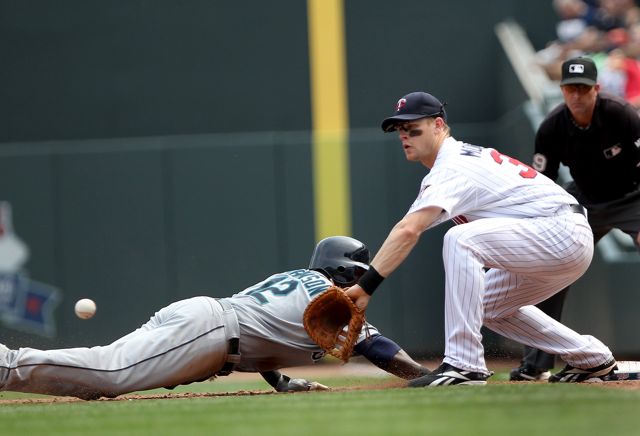 MINNEAPOLIS — Josh Willingham has been as valuable as any Twins player this season, but Thursday he took his turn adding water to their sinking ship.

Willingham had two disappointing at-bats early in the 5-4 loss to Seattle at Target Field, as the Twins missed chances to build a bigger lead against Mariners starter Blake Beavan.

Then in the sixth inning, Willingham dropped a routine fly ball, helping the Mariners move ahead by three runs.

Of course, Willingham has the ability to change things with one swing, and he lined a two-run homer in the eighth inning — his 33rd of the season — to pull the Twins within a run.

They put runners at the corners in the ninth on two walks, but Mariners closer Tom Wilhelmsen got Ben Revere to hit a weak roller to first base, ending the game.

“I just didn’t do a whole lot today early to help us win the game today,” Willingham said.

The Twins fell to 4-17 in their past 21 games and dropped three of four to the Mariners, finishing the season series 2-8 against the last-place team in the American League West.

“The last couple games were a lot more fun than the others — other than the big inning (Thursday) — so hopefully we can build off of that,” manager Ron Gardenhire said.

Duensing is 2-8 with a 6.92 ERA in 12 starts this year, and it’s unclear if his future with the team will be as a starter or reliever.

“I don’t want to take anything away from him right now and start talking about other stuff,” Gardenhire said. “He gave us a great chance to win. We’ll move forward from there and see where we’re at.”