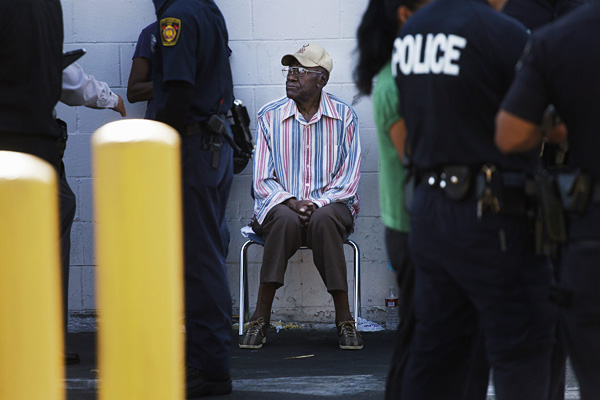 LOS ANGELES — A 100-year-old driver backed up and struck nine children and two adults Wednesday afternoon near a South Los Angeles school as they crossed the street shortly after classes let out for the day.

Rescuers arrived to find a chaotic scene with victims sprawled on the ground and backpacks and other personal items strewn on the sidewalk near 53rd and Main streets.

Four of the children were seriously injured when Preston Carter backed his blue 1990 Cadillac into the victims, who were on their way to buy snacks from a vendor across the street from Main Street Elementary School, authorities said.

The victims ranged in age from 14 months to 48 years old. The children, some of whom attended the school, were in stable condition Wednesday evening, authorities said.

Carter, a Los Angeles resident who will turn 101 on Sept. 5, has a current driver’s license and no history of traffic violations, the Department of Motor Vehicles said. The only restrictions on his license, which is valid until 2013, was that he wear corrective lenses.

As parents gathered at the scene with their children, some questioned whether enough is done to screen elderly drivers and keep them from operating a vehicle if they pose a safety hazard to themselves or others.

The issue of older drivers was thrust into the national spotlight in July 2003 when an 86-year-old man plowed into a crowd at a busy farmer’s market in downtown Santa Monica, Calif., killing 10 people and injuring 63 others.

In California, all drivers 70 years and older are required to pass a vision and written test every five years, DMV spokesman Mike Marando said. Motorists younger than 70 with clean driving records are eligible for two automatic license renewals every five years before having to appear at a DMV office for a vision test, thumb print and photo.

Los Angeles Police Department traffic detectives were looking at whether Carter mistakenly hit his accelerator pedal instead of brake shortly before he rammed into the crowd about 2:30 p.m., a police official said.

Carter was not under the influence of drugs or alcohol as he reversed his car onto 53rd street from a food store parking lot when he struck the victims, LAPD Capt. Jorge Rodriguez said.

“It was a miscalculation on his part,” Rodriguez said. “He thought he was turning onto the street.”

Carter told reporters at the scene that he “lost control of the car,” explaining that his brakes failed.

A his home Wednesday evening, Carter declined additional comment. But his 78-year-old daughter, Ella Fleming, said the family was grateful no one was killed.

“I’m so sorry that it happened,” she said, “and I’m thanking God none of them died.”

Fleming said that her father would not be driving anymore and that he was planning to give his car to the family.

Earlier Wednesday, as word of the accident spread, crisis counselors descended on Main Street Elementary to help students and parents.

William Littles, whose 9-year-old boy attends the school, complained that there’s “not enough supervision” of the children before and after classes.

He said 53rd Street gets very congested because of the vendors, double parked vehicles, and parents and children constantly crossing the street before and after classes end. Officials at the school declined to comment.

“My heart goes out to the parents and children,” Littles said.