Worth Supervisors questioned over possible conflicts of interest 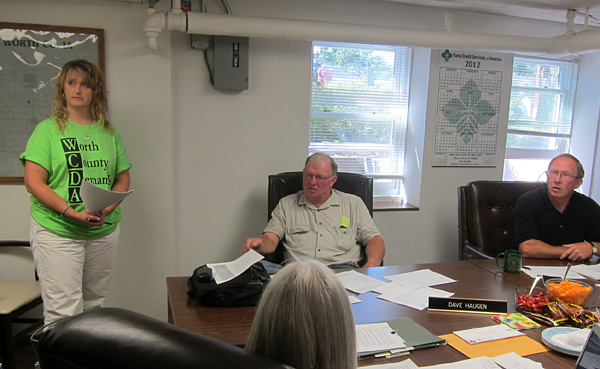 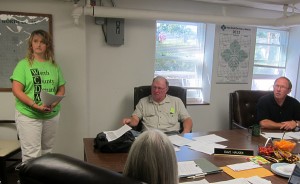 NORTHWOOD – Worth County Demands Action, a group of concerned citizens who are scrutinizing how dollars are spent that flow from the Diamond Jo Casino into the Worth county community through the Worth County Development Authority and the Worth County Supervisors, appeared before the supervisors on Monday with a number of uncomfortable questions for the board.

Melanne Bang of Fertile, (pictured, standing) a member of the group, addressed the board regarding county grant dollars that she says the board has helped earmark for “special interest projects.”

“How much money is the Worth County Board of Supervisors planning on taking from the grants that belong to our Worth county communities and our children for your own special interest projects?” Bang asked the board.

Originally, much of the money the county was to take from casino profits was to be allocated toward education and other grants that directly benefit the communities and citizens of Worth County.  Those grants have been slowed or stopped at this time, and those dollars are now being pooled to pay for new infrastructure near the Diamond Jo Casino in an effort to spur growth.

Bang and the WCDA contend that this is a misappropriation of the casino money. 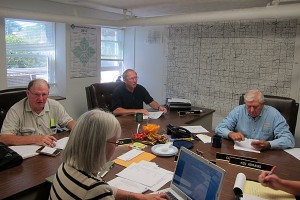 Bang pointed out conflicts of interest as well.

For example, she noted that Supervisor Ken Abrams also acts as board member on the Worth County Development Authority.  According to their website, Supervisor Abrams “is a life long resident of Worth county and is also a founding member of WCDA.”

The Worth County Development Authority says that the organization “has felt that it is not only important to ‘Grow Worth County,’ but to also improve existing infrastructure. To date, WCDA has granted out over 2.6 million to city buses, cemeteries, roads improvements, community centers, water and sewer systems, and more.”

To learn more about this issue, the Northwood Anchor has an in-depth story.    With permission from the Anchor, that story is posted below the following video of the supervisor’s meeting.

From the Northwood Anchor:

On Tuesday, August 7, the Worth County Development Authority (WCDA) board of directors met in regular session at its office in Northwood. After dispensing agenda items, the board heard a number of pointed questions and concerns from members of the community.

Included in those concerns were allegations of irregularities in funding operations and conflict of interest matters. Also voiced was apprehension over a type of revolving door policy designed to ensure that some past WCDA members regain their seat on the board in favor of seating new members.

WCDA is the non-profit organization that was granted a gaming license by the Iowa Racing and Gaming Commission (IRGC) in May of 2005. The license allowed WCDA to sponsor a casino in Worth County, clearing the way for the construction and operation of Diamond Jo Worth, LLC, a casino located seven miles west of Northwood at the I35/Highway 105 interchange. Diamond Jo Worth, in operation since 2006, has exceeded its income projections.

According to an agreement with Diamond Jo, WCDA collects a portion of the gross profits of the casino and is charged with the responsibility of overseeing distribution of those funds. Through an application and granting process, community causes in Worth County and surrounding communities deemed worthy of funding are granted monetary awards during a twice-yearly meeting at the casino. The WCDA also dedicates funds to education in the form of scholarships and for use by school districts with Worth County students in attendance. A portion of those funds are also given to Worth County directly. To date, millions of dollars have been granted to schools, numerous organizations and individuals for projects.

Of the approximately 15 residents from Worth County who attended the meeting, most, if not all, were concerned about the WCDA board’s alleged conflicts of interest, questioning voting irregularities for some of the grants awarded. Another common denominator for the residents centered on the WCDA’s continuous rotation of past board members to fill planned seat vacancies. Individuals selected for WCDA board membership are currently planned until 2016.

Former board member Theresa Cooper resigned from the WCDA board as of June, this year. Cooper is the daughter of a current board member Ken Abrams, an original founder of the authority.

During the meeting, the WCDA board discussed the possibility of seating a new member to replace Cooper, saying the person has to come from the southern part of Worth County to even out representation, geographically. Reeder, Abrams and Gentz are all from Northwood.

With no voice to the contrary, WCDA members expressed similar opinions concerning the difficulty of getting people to agree to serve on the board, suggesting it is problematic, at best. They cited reasons for the dilemma, including the fact that board membership is an unpaid, volunteer position. Also allegedly deterring fresh board applicants is a State law requiring the individual to undergo a thorough Iowa Department of Crim-inal Investigation background check. It was stated that the DCI investigation of a chosen candidate costs WCDA approximately $15,000 and takes about a year to complete.

After hearing criticism of the revolving door practice, attorney Beason explained to the concerned residents that continuing to reinstate the same members of the WCDA board is beneficial to the organization.

“Having the same personnel serve on a board such as the WCDA provides the organization with ‘institutional memory,'” Beason said.

Reeder indicated that the board welcomes new applicants and stated, “We are always looking for people with new and fresh ideas.”

The conflict of interest concern began to surface after April of 2011, with the board’s implementation of its “Special Projects Committee.” This committee was designed to scrutinize all grant applications of $100,000 or more.

Within a few months of the committee’s existence, the board elected to reject all applications, regardless of size or scope, for the granting period ending in April of 2012. The stated purpose of enacting this unprecedented policy was to build a sizable fund for the purpose of allocating the entire grant proceeds for that period to a proposed waste water treatment plant. The proposed plant would be located near the intersection of I35 and Highway 105 in Worth County, serving the area immediately surrounding Diamond Jo Casino.

Reeder restated the mission of the WCDA was to “Grow Worth County.” It has been determined by the board that growth will happen only if the infrastructure at the “four-corner” area (I35/Highway 105) is ready to accept additional business interests.

In this regard, the concern at the meeting was that funds were being depleted or driven away from earmarked education grants. Specifically in question was the correct dollar amount of college scholarships awarded yearly to eligible Worth County high school graduates. It was alleged that the Special Projects Committee objective was negatively influencing that fluctuating grant account.

Along the same vein, another concern that was voiced is that the Worth County Board of Supervisors has already bonded to build the wastewater treatment system with a projected cost of $5.5 million.

Kenny Abrams, WCDA treasurer, who is also one of three Worth County Supervisors, stated that the project will cost the county $3.5 million for the “Fluidyne system.” Fluidyne Corporation specializes in waste water treatment systems.

Through a recent WCDA survey of its board, it was revealed which of its members currently serve local government in various rolls.

Board president Reeder is the appointed Worth County assessor, who’s authority it is to determine the value of real estate for the purpose of taxation.

Along with Russell, Worth County Supervisor Ken Abrams holds a seat on the Worth County Assessor’s Conference board.

Rotating WCDA board member Dennis May is also a Worth County Supervisor and a member of the Worth County Assessor’s Conference Board.

The duty of the Worth County Assessor’s Conference Board is to appoint the assessor and approve the assessor budget. It consists of members of the county board of supervisors, mayors of all incorporated Worth County cities and a member of each school district in the county.

Community members also expressed concerns over Joyce Russell’s influence on WCDA grants awarded to the community of Fertile. Fertile received $308,182.90 for the new Fertile Community Center over three grant cycles from November 2010-2011. According to approved meeting minutes of the WCDA and Fertile City Council, Russell has been a staunch advocate for the community center, which also houses the mayor’s office. Although Russell is barred from voting as mayor, she seconded a motion in November 2011 at a WCDA meeting to accept grants that included granting Fertile Community Center $115,377.90.

At last Tuesday’s meeting, WCDA board members roundly rejected the existence of any instances of conflict of interest concerning grant approval.

With regard to the allegations of incidences of conflict of interest, attorney Beason told the group that the duty of the board is to implement policy and that the Iowa Racing and Gaming Commission have approved the board appointments. In this regard, Treasurer Abrams said the board has the ability to make changes as they wish.

“This board, if we wanted to, we could change all this stuff that we have for education and everything else. This board has the capability, I believe, to change all…that we have right now, to a point,” said Abrams.

The Iowa Racing and Gaming Commission is currently investigating the conflict of interest concerns and is expected to release a report of its findings sometime in September.

0 0 votes
Article Rating
Subscribe
Login
25 Comments
Newest
Oldest Most Voted
Inline Feedbacks
View all comments
PrevPreviousAlliant to trim trees in Mason City, Clear Lake, Manly, other towns
NextPark Inn expects to be “in the black” by end of 2012Next