Obama: Congress Should Back Plan to Hire Teachers 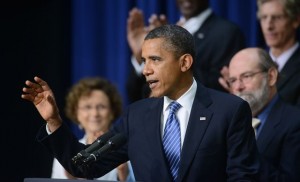 With students starting to head back to school, President Obama used this week’s address to discuss the critical role that education plays in America’s future. Nothing is more important to a child’s education than a great teacher. Unfortunately, tens of thousands of teachers will not be going back to school this year, partially because of budget cuts at the state and local level. That means more crowded classrooms, fewer kindergarten and preschool programs, and shorter school years and weeks.  President Obama has proposed a jobs bill that would help states prevent further layoffs and rehire teachers, but Congress refuses to pass it. Instead, the budget that almost every Republican voted for would further cut education in order to give tax breaks to millionaires and billionaires.  The White House has taken steps including investing in science and math, giving states more flexibility on No Child Left Behind, and increasing financial aid for millions of young people, but in order to help America lead in the 21st century, our elected officials in Congress must stand up for our nation’s young people to help ensure that we have the strongest education system in the world.

Hi, everybody.  This week, I spent some time traveling across Iowa talking with folks about rebuilding an economy where if you work hard, you and your family can get ahead.

And along the way, I stopped in at Cascade High School to thank the teachers there for doing such a great job – and wish them luck as they head back to the classroom for this school year.

Teachers matter.  Most work tirelessly, with modest pay, sometimes digging into their own pocket for school supplies – just to make a difference.  They give everything for our kids – and in return, we should invest in them.

But here’s the thing: this year, several thousand fewer educators will be going back to school.  Since 2009, we’ve lost more than 300,000 education jobs, in part, because of budget cuts at the state and local level.

Think about what that means for our country.  At a time when the rest of the world is racing to out-educate America; these cuts force our kids into crowded classrooms, cancel programs for preschoolers and kindergarteners, and shorten the school week and the school year.

That’s the opposite of what we should be doing as a country.  States should be making education a priority in their budgets, even in tough fiscal times.  And Congress should be willing to help out – because this affects all of us.

That’s why part of the jobs bill that I sent to Congress last September included support for states to prevent further layoffs and to rehire teachers who’d lost their jobs.  But here we are – a year later with tens of thousands more educators laid off – and Congress still hasn’t done anything about it.

In fact, the economic plan that almost every Republican in Congress voted for would make the situation even worse.  It would actually cut funding for education – which means fewer kids in Head Start, fewer teachers in our classrooms, and fewer college students with access to financial aid – all to pay for a massive new tax cut for millionaires and billionaires.

That’s backwards.  That’s wrong.  That plan doesn’t invest in our future; it undercuts our future.

That’s why we launched a national competition to improve our schools.  And for less than one percent of what our nation spends on education each year, we’ve encouraged almost every state to raise their standards – the first time that’s happened in a generation.

That’s why we’ve invested in math and science education, and given states more flexibility on No Child Left Behind.

And that’s why we’ve reformed the student loan program to put students before big banks, and increased financial aid for millions of young people – because in America, higher education cannot be a luxury; it’s an economic necessity every family should be able to afford.

This is a country where no matter what you look like or where you come from, if you’re willing to study and work hard, you can go as far as your talents will take you.  You can make it if you try.  I am only the President of the United States today because of the chance my education gave me.  I want every child in America to have that chance.  That’s what I’m fighting for.  And as long as I have the privilege of being your President, that’s what I’m going to keep fighting for.

Thanks, and have a great weekend.