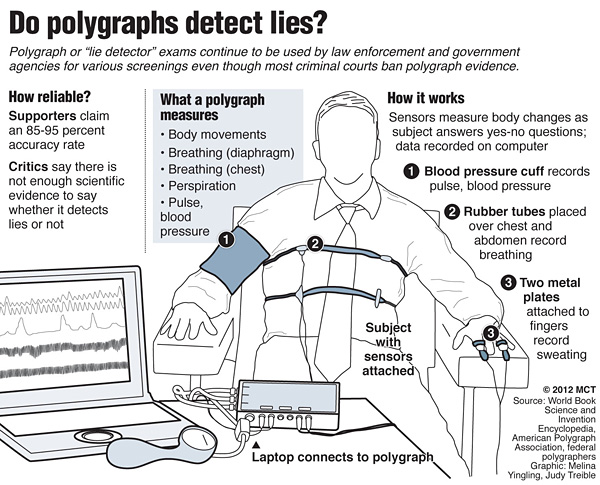 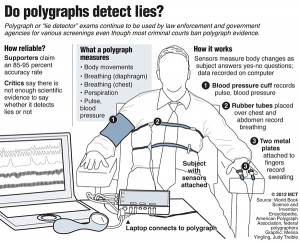 WASHINGTON — One of the nation’s most secretive intelligence agencies is pressuring its polygraphers to obtain intimate details of the private lives of thousands of job applicants and employees, pushing the ethical and legal boundaries of a program that’s designed instead to catch spies and terrorists.

(PHOTO: Graphic shows how a polygraph exam is given, what body changes the device measures on a subject; what supporters and critics say about reliability of polygraphs. )

The National Reconnaissance Office is so intent on extracting confessions of personal or illicit behavior that officials have admonished polygraphers who refused to go after them and rewarded those who did, sometimes with cash bonuses, a McClatchy Newspapers investigation found.

The disclosures include a wide range of behavior and private thoughts such as drug use, child abuse, suicide attempts, depression and sexual deviancy. The agency, which oversees the nation’s spy satellites, records the sessions that were required for security clearances and stores them in a database.

Even though it’s aggressively collecting the private disclosures, when people confess to serious crimes such as child molestation they’re not always arrested or prosecuted.

“You’ve got to wonder what the point of all of this is if we’re not even going after child molesters,” said Mark Phillips, a veteran polygrapher who resigned from the agency in late May after, he says, he was retaliated against for resisting abusive techniques. “This is bureaucracy run amok. These practices violate the rights of Americans, and it’s not even for a good reason.”

The agency refused to answer McClatchy’s questions about its practices. However, it’s acknowledged in internal documents that it’s not supposed to directly ask more personal questions but says it legally collects the information when people spontaneously confess, often at the beginning of the polygraph test.

After a legal review of Phillips’ assertions, the agency’s assistant general counsel, Mark Land, concluded in April that it did nothing wrong. “My opinion, based on all of the facts, is that management’s action is legally supportable and corrective action is not required,” he wrote.

But McClatchy’s review of hundreds of documents — including internal policy documents, memos and agency emails — indicates that the National Reconnaissance Office is pushing ethical and possibly legal limits by:

—Establishing a system that tracks the number of personal confessions, which then are used in polygraphers’ annual performance reviews.

—Summoning employees and job applicants for multiple polygraph tests to ask about a wide array of personal behavior.

—Altering results of the tests in what some polygraphers say is an effort to justify more probing of employees’ and applicants’ private lives.

Various national security experts, including those who support the use of polygraph in general for security screening, said they were disturbed by what McClatchy found, especially considering that the number of polygraph screenings has spiked in the last decade.

“There’s a narrow jurisdiction for a polygraph program, which is to promote security,” said Steven Aftergood, a senior analyst with the Federation of American Scientists, a nonpartisan research center that tracks intelligence policies. “When agencies exceed their authority, they not only violate the privacy of employees, they corrupt the entire process.”

The dispute is part of a long-running debate over the proper use of polygraph by the federal government in screening employees, when it’s not known whether the machine can detect the difference between a lie and the truth or simply registers an emotional response.

Yet since then, in the Defense Department alone, the number of national-security polygraph tests has increased fivefold, to almost 46,000 annually. Many of those who are required to undergo the tests aren’t just bureaucrats in Washington but also private contractors across the country.

Federal agencies say the information gathered during polygraph screenings helps them root out undesirable and even dangerous employees who otherwise wouldn’t be detected during routine background investigations, which often are described as expensive and time-consuming.

But some national security experts question whether U.S. agencies are striking the appropriate balance between protecting Americans’ privacy rights and the nation’s security interests as agencies are being permitted to ask what could be seen as more intrusive questions.

Last month, the Obama administration announced that federal agencies, including the National Reconnaissance Office, now may ask employees and applicants during polygraph screenings whether they’ve leaked classified information to the news media.

“If a whole program is susceptible to manipulation, then relying on it further is all the more disturbing,” Aftergood said.

The National Reconnaissance Office orders the second highest number of screening polygraphs in the Pentagon, conducting about 8,000 a year at its headquarters in Chantilly, Va., and at locations in Los Angeles and the Silicon Valley area.

The agency’s is among eight Pentagon polygraph programs that under Defense Department policy can directly ask only about national security issues in what’s known as the counterintelligence scope polygraph. The test was designed to catch spies and terrorists who are trying to infiltrate the government without encroaching unnecessarily on the private lives of government employees and military personnel. Polygraphers are allowed to ask about espionage, terrorism, sabotage and the unauthorized sharing of classified information.

But about five years ago, the National Reconnaissance Office began pressuring polygraphers to pursue information outside those limits in what amounted to an unwritten policy, said a group of polygraphers who agreed to describe the practices to McClatchy. The polygraphers include Phillips, a former Marine who worked for a number of intelligence agencies over two decades, and a former National Reconnaissance Office colleague, Chuck Hinshaw.

Both agreed to be named because they think the agency’s practices violate Defense Department policies and should be stopped.

Other polygraphers backed their accounts, but they asked to remain anonymous because they feared retaliation. “I was coached to go after this stuff,” one of the polygraphers said. “It blew my mind. They were asking me to elicit information that I’m not permitted to ask about, and I told them I wasn’t going to do it.”

Another longtime polygrapher said the National Reconnaissance Office had established an off-the-books policy that encouraged going after prohibited information.

“The organization says in writing that they’re not supposed to be asking about this information, when in fact behind closed doors they are pushing (polygraphers) to actively pursue it,” the polygrapher said.

Hinshaw, who said he’d witnessed the improper practices as a former acting supervisor, accused the agency of becoming so cavalier about following the rules that the polygraph branch chief, Michael McMahon, pressured him to change the results of the agency director’s polygraph if he failed the test. In the end, director Bruce Carlson passed, but Hinshaw said the incident demonstrated how the agency’s use of polygraph was arbitrary and wasn’t about protecting the country.

McMahon didn’t respond to emails and phone messages from McClatchy inquiring about the incident.

But even if the agency were found to be violating Pentagon policies, the laws that limit the government’s use of polygraph in screening aren’t specific on what constitutes an illegal abuse. The Privacy Act of 1974 requires that the government collect only personal information that’s necessary and relevant, and a 1981 presidential directive calls for “the least intrusive collection techniques feasible.”

Much of the interpretation of what that means has been left to the federal departments that run the polygraph programs.

In fiscal year 2011, almost 50 percent of the 757 confessions the National Reconnaissance Office collected were of the personal nature that the rules said shouldn’t be directly pursued, the agency’s statistics show. Of 33 polygraphers, one-third collected more confessions related to personal behavior than to national security violations.

Within the intelligence world, only the CIA and the National Security Agency are permitted to directly ask about drug use, unreported crimes and falsification of the forms filled out for national security clearances, which require a wide array of personal information. The tests are known as lifestyle polygraphs.

Late last year, the Pentagon discovered that the National Reconnaissance Office had ordered five of the lifestyle tests in violation of Defense Department policies, according to an internal report obtained by McClatchy. The agency then claimed to have the legal authority to do so, when it was supposed to be asking only national security questions designed to catch spies and terrorists, the report said. The Pentagon concluded that the program was in “full compliance” because the agency said it was a mistake.

Polygraphers, however, say the agency’s pursuit of the off-limits information is much more widespread than the Pentagon’s report noted. Records show that the agency ordered at least one more lifestyle test after it was told to stop.

Despite the agency’s interest in criminal behavior, those who confess to serious offenses aren’t always criminally prosecuted even when child molestation is involved, McClatchy found.

In one case, a contractor who was a former Escondido, Calif., substitute teacher admitted to molesting a third-grade student in 2005 during outside tutoring sessions paid for by the girl’s immigrant parents. In a 2010 polygraph session, the man said that if he were asked, “ ‘Have you ever molested a 9-year-old?’ I’d have to say yes.”

The Escondido Police Department and school district where he’d been employed weren’t notified of the incident. After being contacted by McClatchy, the school district called the Escondido Police Department to file a report. When National Reconnaissance Office polygraphers asked supervisors in a meeting last summer why people weren’t being arrested on the spot after such confessions, they were told that the allegations were referred to the appropriate authorities, Phillips and Hinshaw said.

The agency refused to answer McClatchy’s questions about the molestation confession, saying in a statement only that its polygraph program “is in compliance with the law.”

“The National Reconnaissance Office directs, manages and oversees appropriate investigative inquiries, including polygraph, for the purposes of rendering informed security access determinations. Such inquiries and determinations are in full compliance with the law and provide the security compliance required to best protect and further Intelligence Community program activities and objectives.

“If adverse information is disclosed during the administration of a polygraph examination the information is evaluated and forwarded to the appropriate authorities. For Privacy Act purposes the NRO has a policy of not commenting on specific cases.

“The National Center for Credibility Assessment (NCCA), Quality Assurance Program (QAP), conducted an on-site inspection of the NRO Polygraph Program on November 15-17, 2011. During the QAP inspection, 118 criteria in nine primary areas were reviewed. Upon conclusion of the inspection, the NRO Polygraph program was found to be in full compliance with their policies and procedures and met or exceeded all standards required of a federal government polygraph program.”