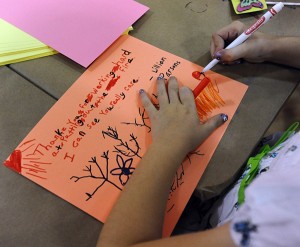 By Ryan Maye Handy and Wayne Heilmamn, The Gazette –

COLORADO SPRINGS, Colo. — Firefighters gained 45 percent containment Saturday on the Waldo Canyon fire in Colorado and, after a week of firestorms, some shell-shocked El Paso County residents returned to evacuated neighborhoods. Others will be allowed to see their damaged or destroyed homes for the first time Sunday.

(PHOTO: Lillian Parsons, 8, makes a thank you card for the firefighters fighting the Waldo Canyon Fire, at Imagination Space in The Citadel mall in Colorado Springs, Colorado. Saturday, June 30, 2012.)

All the while, firefighters gained ground against the 17,000-acre blaze.

“Today is going to be our test day,” Marr said at a morning news conference.

Although pushed by wind and stoked by 94-degree temperatures, the lines on the fires’ weakest flanks held Saturday. Commanders sketched a black containment line on maps of the fire’s southwestern corner, and Harvey was happy to report that firefighters had reached the north rim of the blaze, which had been too hot to touch a day before.

“In terms of progress toward containment, this is the best day yet,” said Harvey, on Saturday afternoon. “Our crews had a pretty good day today. We had no additional acres or structures burned and no firefighters injured today. … Crews made progress on all sides of the fire and are optimistic.”

Fire officials have not changed their July 16 estimate of when the fire will be contained, but Harvey said officials think containment could come sooner.

“I think you can see containment is a lot closer today than it was yesterday.”

Harvey warned that fire danger remains high in Colorado Springs, the rest of the state and throughout the West and will remain so through summer.

“We are always concerned about a repeat of what happened Tuesday,” Harvey said, referring to the day when the fire burst into the city, destroyed 346 homes and killed two people. “The relative potential for fire is high. There is still a danger out there.”

While fire crews cautiously rejoiced over Saturday’s successes, hundreds of evacuees waited to learn the fate of the homes they left behind. The 34 streets on the city’s lists of destroyed addresses did not include those streets in the burn area where homes were relatively untouched by leaping flames, leaving their owners wondering what they would find.

Karen Bockstahler, whose second home is on Mondi Court, was in Maryland when the fire made a run, roaring past her cul-de-sac neighborhood west of Flying W Ranch Road on Tuesday night. While Bockstahler’s home likely survived, Mondi Court was not listed on documents given to residents Thursday. Her neighbor, DiAnne Mahsman, waited patiently for news of her home. On Sunday, she will go to the neighborhood for the first time since her evacuation.

A few streets away, Jeff Panenfuss and his neighbors on Kirby Court, which was also spared, will return Sunday. Kirby Court is sandwiched between Courtney Drive and Rossmere Street, both of which were heavily hit by the blaze. Panenfuss suspects that his backyard view will now be of smoldering ruins. Kirby Court residents tried to re-create their neighborhood in the Town Place Suites, off Garden of the Gods Road, where most of the community plans to live until they are allowed back, Panenfuss said.

But a permanent return date for Panenfuss and others was not forthcoming from officials on Saturday.

The key to allowing residents of those areas to return will be restoring electric and natural gas service, said Colorado Springs Utilities CEO Jerry Forte. Crews from Colorado Springs Utilities, Xcel and Atmos Energy are replacing dozens of transformers and rebuilding power and natural gas lines in those areas. Residents will not be allowed to return until utilities service can be restored, he said.

Natural gas service in those areas will remain disconnected when evacuations are lifted, and residents will have instructions to contact Colorado Springs Utilities to get service restored, he added.

“We are working to restore power to the 992 customers in Mountain Shadows. And that is a big job. We won’t have it restored by tonight, but we will be working into tomorrow,” Forte said.