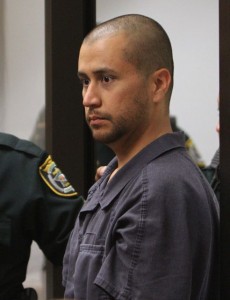 SANFORD, Fla. —George Zimmerman went from 45 days of being a hunted man in seclusion to eating Jolly Ranchers and killing time with puzzle books in a 67-square-foot cell.

He’ll be having breakfast at 4 a.m. and getting yard time three hours a week.

A man who seven weeks ago studied criminal justice and dreamed of becoming a cop is jailed without bond on a second-degree murder charge, accused of profiling and slaying an innocent teenager. He faces the prospect of life in prison.

An inmate at the John E. Polk Correctional Facility in Seminole County, he is segregated from the jail’s general population, because jail officials fear too many people would like to see him dead.

“Obviously it was a horrible intersection of two young men’s lives,” his attorney Mark O’Mara said.

Prosecutors say it was a more than just a chance encounter that ended badly for Zimmerman and worse for Trayvon Martin, the unarmed 17-year-old he killed. The probable-cause affidavit filed Thursday by two veteran investigators for the special prosecutor handling the case accuses Zimmerman of “profiling” the boy and assuming him to be a criminal.

The document, filed in court before Zimmerman’s attorney entered a plea of not guilty Thursday, does not mention race.

By now, everyone knows the dead teen, a junior at Dr. Michael M. Krop Senior High, was black. Zimmerman is a white native of Virginia whose mother was born in Peru.

Their paths crossed Feb. 26 at the Retreat at Twin Lakes, at a gated community in Sanford, north of Orlando, where Zimmerman lived and Trayvon was visiting.

“Martin was unarmed and was not committing a crime,” the affidavit states. While driving his vehicle, the affidavit says, “Zimmerman observed Martin and assumed Martin was a criminal. Zimmerman felt Martin did not belong in the gated community and called police.”

The affidavit, presented to County Court Judge Mark E. Herr to support the charge of second-degree murder, does not offer any new details in the case that has gripped the nation. But it does take sides, making clear that prosecutors believe Martin’s relatives were right when they said Zimmerman tailed their son for no reason even after an operator told him to stop.

Investigators said they interviewed the girl who was on the phone with Martin just before he died.

“The witness advised that Martin was scared because he was being followed through the complex by an unknown male and didn’t know why. Martin attempted to run home but was followed by Zimmerman who didn’t want the person he falsely assumed was going to commit a crime to get away before the police arrived,” the affidavit says.

The document recounts how the operator told Zimmerman to wait for police. It notes that Zimmerman muttered, “these a — holes always get away” and referred to “these (expletive) punks.”

The reference to “punks” was a hotly debated controversy, as many who listened to the tape thought they could hear Zimmerman using a racial slur. It was unclear whether the state attorney’s office had the tape analyzed professionally to determine what he said, or whether it was simply the word investigators heard when they listened to it.

Many people believe they heard a much uglier word, but the utterance was too muffled to say for sure.

Zimmerman, the investigators said, confronted Martin. And it was Martin, investigators believe, whose distressed voice is heard in the background of a 911 call begging for help.

The affidavit was signed by 4th Judicial Circuit investigators T.C. O’Steen and Dale Gilbreath. O’Steen has 35 years of law enforcement experience, including 20 years as a homicide investigator. Gilbreath was at the Jacksonville Sheriff’s Office before working with the state attorney and has worked homicides for 24 years.

One sentence in the affidavit is blacked out and kept secret.

The rest of the case’s supporting evidence was ordered sealed, too. The defense attorney asked Herr to keep the public records from the hands of the media, which he said had too much piecemeal information already. Special prosecutor Angela Corey agreed.

The case was then sent up to circuit court and will be heard before Judge Jessica J. Recksiedler, a Central Florida native who has been on the bench for just over a year. Arraignment was set for May 29.

A bond hearing may be held before then. O’Mara said he decided not to seek one right away because it would have forced prosecutors to make more evidence public, which would not have helped calm the public fervor.

“It’s really supposed to happen in the courtroom,” he said of the trial and discussion of evidence.

Zimmerman appeared before a judge for the first time Thursday afternoon, wearing a dark gray prison jumpsuit. He said little except to answer, “Yes, sir,’’ twice to acknowledge he understood the charge against him and his representation by an attorney.

O’Mara said he was not collecting any legal fees from Zimmerman, who he described as “indigent.” He didn’t know how much has been raised by a PayPal account Zimmerman set up to accept donations.

“We are devastated,” his brother Robert Zimmermann told CNN’s Piers Morgan, insisting that his brother acted in self-defense. “The only silver lining in all of this is that my brother is safe. For our family, that’s the only respite we’ll get tonight when we lay our heads down to sleep is that we’ll know that our brother is safe.”