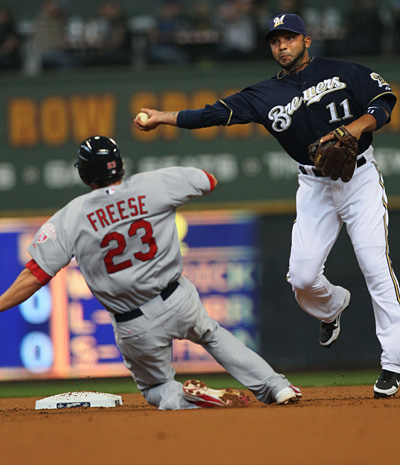 MILWAUKEE — An afternoon designated for the grand return of an elite starting pitcher who might have a hand in tilting the division race delivered on that promise Saturday at Miller Park.

It just wasn’t only the ace in a St. Louis Cardinals jersey.

Milwaukee Brewers starter Zack Greinke bested Adam Wainwright and defused the Cardinals’ lineup in the Brewers’ 6-0 victory. Greinke and two homers by Corey Hart ushered the defending World Series champions to their first loss of 2012. Greinke struck out seven in seven shutout innings, running his franchise-best streak of consecutive home wins to 12. Wainwright pitched 5 2/3 solid innings in his first regular-season appearance in 563 days, gaining sharpness with each inning until leaving in the middle of the sixth inning.

“We had two heavyweights going at it there for awhile,” Cardinals manager Mike Matheny said. “When you run into those guys (like Greinke), you try and scratch and claw and get something going. Our guy went out and really did the same thing.”

In his first start since September 2010, Wainwright struck out six and allowed three runs on four hits and a walk. Wainwright, who missed all of 2011 recovering from reconstructive elbow surgery, eclipsed 75 pitches for the first time this year. Aramis Ramirez’s sixth-inning RBI double came on Wainwright’s 88th pitch and chased him from the game. Wainwright (0-1) weathered early command trouble, found his groove and reached that point in the game with the Cardinals trailing only by a run.

Pitching through six innings with a 1-0 lead, Greinke muzzled the first Cardinals’ lineup in club history to start a season with at least 13 hits in the first two games. The Cardinals had blistered Miami and Milwaukee with 15 runs, 29 hits and 30 at-bats with runners in scoring position in the first two games. Greinke faced the minimum through four innings, and by the end of the fifth the Cardinals got just five balls out of the infield.

“I think he’s on a mission,” Brewers left fielder Ryan Braun said Friday, hinting at Greinke’s season debut. “He’s determined to have a dominant season, to truly have a great season.”

The dynamics of the National League’s Central Division have changed with the departures of two top sluggers, Prince Fielder and Albert Pujols. Rather than rebuild, their former teams have reloaded for what could be an arms race. The Brewers brought back all five starters from the rotation, which was one of two in the NL with four starters who had at least 19 quality starts each. Greinke is a former Cy Young Award winner and had 19 wins last year despite missing a month. A full healthy season from him enhances the Brewers chances of repeating.

Similarly, Wainwright, a two-time finalist for the Cy Young, is the leading reason the Cardinals believe they might improve upon 90 wins from last season. Brewers manager Ron Roenicke said his hitters used scouting reports from this past spring training because they didn’t know how the post-surgery Wainwright would compare to the pre-surgery ace. After Hart’s solo homer in the second put the Brewers ahead 1-0, Wainwright retired 12 of the next 13 batters.

Roenicke had his answer.

“I saw the great pitcher that he was,” he said. “The velocity’s not what he used to pitch at. This is a true, legitimate No. 1 starter.”

Wainwright said he pitched too “fine” early in the game, and as he became more aggressive, the velocity improved. He got Braun to hit into a double play on a 93-mph fastball in the sixth before hanging a curve to Ramirez.

“You can look at my breaking ball, especially my bigger breaking ball, and I was not locating like I normally would,” Wainwright said. “But I would say the same thing about my heater. My fastball, I wouldn’t say it was erratic, but I was missing. As the game went, it got better. It’s a pitch away from being 1-0.”

The Cardinals were going off spring reports as well, and heard that Greinke wasn’t only successful in spring (2.82 ERA) but toying with a new pitch. Greinke threw at least 20 cut fastballs in one spring start to master it. He riddled the Cardinals with it. The Cardinals never reached third base safely against him and only twice got the tying run to second base, each time with two outs.

The Cardinals bullpen allowed two homers that helped the Brewers pull away in the final three innings. Victor Marte relieved Wainwright and the first hitter he faced as a Cardinal, Hart, tagged him with a two-run homer.

In the past, manager Tony La Russa would use this loss to point to the rubber game Sunday at Miller and reinforce his “win the series” mantra.

“I haven’t been stressing that,” Matheny said. “I stress that we compete every pitch. We just go out and control the things that we can control and not go in necessarily with the goal of winning the series. … We break it down into more manageable pieces.”