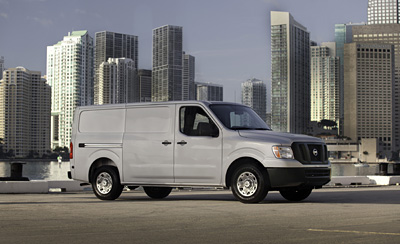 By Larry Printz, The Virginian-Pilot –

For decades, Detroit automakers have gone unchallenged in a particularly unglamorous segment of the vehicle market: full-size cargo vans.

That’s no longer the case, with such competitors as the oversized Sprinter van, built by Daimler’s Freightliner division and sold here as a Mercedes-Benz.

Nissan also has entered the fight, with the 2012 NV, its first production commercial vehicle in the United States.

The NV, which stands for Nissan Van, is available in three lines — the 1500, 2500 HD and 3500 HD — and in two body styles: Standard Roof and High Roof. Each variant is available in S and SV trim levels.

The NV’s enormous cargo hold is 120 inches long and 70.2 inches wide. All models can be had in a Standard Roof configuration, which offers 55.8 inches of cargo area height. The High Roof model provides 76.9 inches of cargo height — enough for most users to stand up while walking through the cargo compartment. But it’s only available in 2500 HD and 3500 HD models.

There are two engines offered: a 261-horsepower 4.0-liter V-6 and a 317-hp 5.6-liter V-8 engine. A standard five-speed automatic transmission feeds power to the rear wheels. All-wheel drive is not offered.

Given the vehicle’s curb weight, the V-6 is adequate to get the job done, although I never fully loaded the van. Mileage is predictably dreadful (albeit good for a cargo van): 11-12 around town, 18 on the highway. The EPA doesn’t rate the NV for mileage as its gross vehicle weight is 50 pounds more than the agency’s 8500-pound limit.

Ride and handling are typical of the breed. Minor bumps are filtered out, but most road shocks register through the suspension and steering wheel, although body motions seem well-controlled. Road, wind and tire noise are pronounced, as if someone has left a window open. Given this is a big metal box without much sound insulation, that’s little surprise.

Once adjusted to its enormous size, the NV 2500 doesn’t feel unmanageable, with the exception of parking lots, where backing up calls for care. Thankfully, there’s a much-needed backup camera to aid in such maneuvers, even if the screen is a little small.

The NV has a commanding driving position that gives you a clear view of traffic.

You look over the roofs of Jeep Grand Cherokees and Cadillac Escalades.

The NV’s instrument panel materials seem on par with the rest of this class; lots of hard plastic that suggests durability over high cost. The interior’s gray color is drab.

Cargo space aside, there seems to be little to recommend over its competition. But you’d be wrong.

What separates the NV from its envious competition is the pickup truck-like amenities offered. A usefully large center console bin can hold laptops and portable printers, while a small tray holds other items. There’s a USB port and power point to accommodate them along with large cup holders and lots of open storage bins.

There are some demerits, however. The combined audio and navigation system’s diminutive buttons and knobs are too small for a work truck where contractors could be easily wearing gloves. Inexplicably, there’s a useless storage slot beneath the audio system that could be used to enlarge it.

The door locks emit a cheap clacking sound when locking. Doors close with a cheap clang. Worse, looking down from a second-story window revealed sloppy welds on the roof that were not covered up by trim.

Finally, this is one truck that won’t win any beauty contests.

But the NV’s beauty is its utility. Despite being big and ugly, it offers a few advantages over its rivals, with enough cargo space to haul a small bungalow while providing the comforts found in pickup trucks.