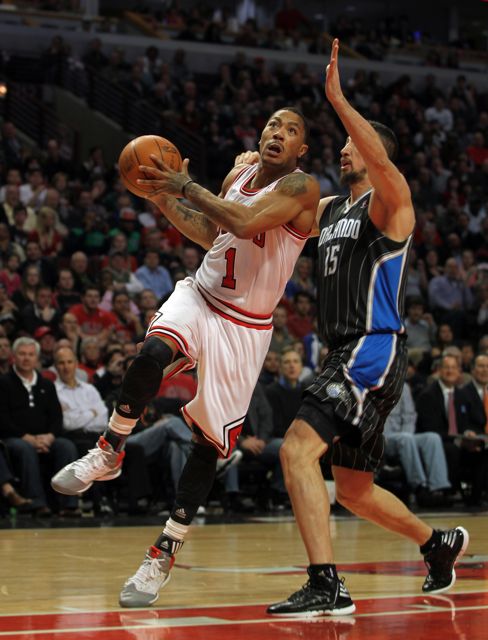 CHICAGO — This is a win the Orlando Magic will remember for a long time.

After they squandered a second-quarter lead of 18 points and let a nine-point lead early in the fourth quarter slip away, they recovered and beat the Chicago Bulls, 99-94, at United Center.

(PHOTO: The Chicago Bulls’ Derrick Rose drives against the Orlando Magic’s Hedo Turkoglu, right, in the second quarter at the United Center in Chicago, Illinois, on Thursday, March 8, 2012.)

After Carlos Boozer hit a jumper to put Chicago ahead 91-89 with 2:55 to go, Jason Richardson hurt his left leg with 2:10 to go when Jameer Nelson accidentally ran into him. Richardson did not return.

But Nelson and Dwight Howard connected for an alley-oop dunk on Orlando’s ensuing trip down the court to tie the score, and Ryan Anderson hit a 3 to put Orlando ahead 94-91. Anderson then hit a pair of free throws with 45.7 seconds left to extend the lead to five points and quiet Bulls fans.

Howard finished with 29 points and 18 rebounds, both game highs.

Boozer scored a team-high 26 points for the Bulls, who also received 17 points from Derrick Rose on 6-of-22 shooting.

With the victory, the Magic broke the Bulls’ eight-game winning streak.

Also, and perhaps more important, Orlando improved its record against the league’s elite teams — the Bulls, the Miami Heat, Oklahoma City Thunder and San Antonio Spurs — to 2-5 this season.

Orlando led 84-75 early in the fourth quarter, but Chicago went on a 9-0 run on a pair of baskets by Boozer, a 3-pointer by John Lucas III and a pair of free throws by Joakim Noah.

Hedo Turkoglu stopped the Magic’s bleeding when he attempted a 3-pointer and drew a questionable by Jimmy Butler. Turkoglu made the three ensuing free-throw attempts to put Orlando ahead 87-84 with 6:04 to go.

The Magic led by as many as 18 points in the second quarter, but the Bulls steadily chipped away at that lead.

But after Chicago went ahead 67-66 with 4:35 remaining in the third quarter, the Magic closed the period on a 12-5 run that ended with a pair of 3-pointers by Richardson.

Why did the Magic win the game? Partly because they limited the Bulls’ fastbreak chances. Chicago scored just four points on the break. Meanwhile the Magic, who normally play at a glacially slow pace, scored 15 fastbreak points.

Orlando arguably hit its high point of the night with 4:07 left in the second quarter.

Howard made a layup as he was fouled by Noah and then hit the and-one to put Orlando up 52-34.

But Chicago caught fire and closed the period on an 18-5 run.

Kyle Korver ignited the rally. He hit a 3-pointer from the left corner, then made two long 2-point jumpers and went to the foul line on Chicago’s next possession.

In all, Korver scored eight consecutive points for the Bulls.

His teammates took it from there.

Luol Deng sank a trey off a Noah offensive rebound and a pass from Korver to close the gap to 57-49 with 23.0 seconds remaining in the half.

When Orlando got the ball back for the last shot of the half, Noah stole a pass by Nelson. The ball went ahead to Rose, who hit a running 3-pointer from 26 feet out as time expired.

And Rose had his second buzzer beater in as many nights. On Wednesday, he hit a jumper as time expired to lift the Bulls to a 106-104 win over the Milwaukee Bucks.

That momentum didn’t carry over for the Bulls (33-9), at least not at the beginning of Thursday’s game.

The Magic (26-15) dominated the opening quarter.

If it seemed like they made almost every shot, that was because they almost did.