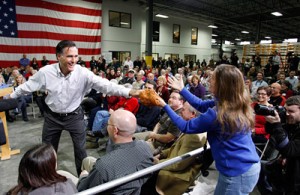 In all, the “super PAC” — which can take unlimited donations from individuals and corporations — has raised $36.8 million for the election cycle.

This month’s haul marks an acceleration in the group’s fundraising pace, but unlike in months past, did not collect any million-dollar checks.

Some big givers from 2011 opened their checkbooks again: Julian Robertson, a hedge fund executive from New York, chipped in $250,000 in January to go along with the $1 million he gave last fall. The hotel magnates and brothers J.W. and Richard Marriott each gave $250,000 to the group last month, bringing their overall donations to $750,000 apiece.

A handful of prominent California business figures also show up in the filings. Among them are real estate baron John C. Cushman III, of Cushman and Wakefield, who gave $100,000 and Susan Groff, a Northridge-based contractor who gave $225,000 and an additional $25,000 from her family trust. Groff’s husband, Howard Groff, had given the group $100,000 last April.

And Meg Whitman, a longtime Romney ally who is currently chief executive of Hewlett-Packard, formerly the head of eBay and an unsuccessful California gubernatorial candidate, gave $100,000