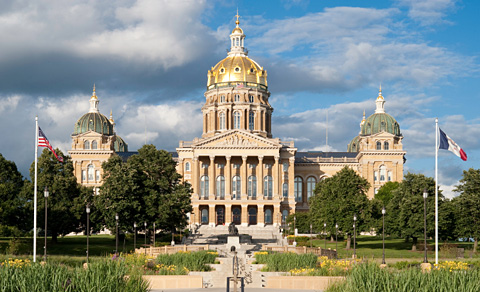 DES MOINES — The legislative footprint of the 2012 General Assembly is beginning to take shape this week as a number of high-profile — read controversial — bills work their way through the committee process.

Example One is a bill that would pave the way for MidAmerican Energy to pursue approval to develop a small-scale nuclear reactor, with ratepayers picking up the cost. House File 561, which was approved 58-39 in the House last year, is scheduled for action Tuesday in the Senate Commerce Committee.

Senate Majority Leader Mike Gronstal, D-Council Bluffs, acknowledged that there is “some support” in the Senate for the bill, along with concerns with protecting utility customers.

However, he said, doing nothing has its risks, too: “Every option will result in some increase.”

A bill likely to come before the House Transportation Committee on Thursday could be a financial risk to lead-footed drivers. House File 2048, sponsored by Rep. Walt Rogers, R-Cedar Falls, would ban red-light and speed cameras in Iowa. It calls for all existing cameras to be removed by July 1.

So far the debate has pitted law enforcement and city officials against personal liberty interests.

“How much of a police state do we want to have?” Rogers asked at a hearing where his bill won subcommittee backing.

Like the nuclear energy bill, the House-passed traffic camera ban died in the Senate last year.

The Transportation Committee also will hear from former Department of Transportation Director Nancy Richardson and Allen Thoms, the co-chairs of Gov. Terry Branstad’s citizen advisory commission on transportation issues. That panel recommended a gas tax increase, an idea the governor has rejected — for the current year. Legislators believe support is building for a bill that would phase in an increase of eight to 10 cents over two years beginning in 2013.

“You might not notice it, but in these small towns — you know, we’ve got 900 cities out there, and in many of these towns the streets are a disaster,” said Senate President Jack Kibbie, D-Emmetsburg, who has been championing a gas tax for years. “The county roads … are just falling apart on us.”

In some cases, he said, livestock producers in northwest Iowa are doing their own snow removal because counties have quit plowing roads that are not traveled by school buses.

“If we have to wait for the federal government to help, it might be a damn long time. So it’s time for us to take the bull by the horns in a bipartisan effort,” Kibbie said.

GOP leaders were having none of that. House Speaker Kraig Paulsen, R-Hiawatha, said the state budget can be balanced without raising taxes. Senate Minority Leader Jerry Behn, R-Boone, said he doesn’t see broad support “for raising that this year.”

Another live round this week could be bills in both chambers to lift the ban on using lead shot for dove hunting. Committees in the House and Senate have voted to remove the ban imposed by the Natural Resources Commission. Opponents of lead shot cite the danger to humans and other animals that ingest lead shot.

However, some lawmakers see it as a turf battle.

“It’s not about lead shot and steel shot,” Paulsen said. “We had that debate on the House floor. There was an amendment on that and a decision was made by the Legislature. Then we had an executive agency that did whatever they wanted to anyway. I have a problem with that.”

That bill could come up for House debate late in the week.

Other issues popping this week include the governor’s proposal to help employees buy Iowa companies that come up for sale, as a way to keep jobs and businesses in the state. It’s slated for the House Ways and Means Committee debate.

One that’s likely to get attention, in the wake of the still-unfolding case of the $7.5 million Hot Lotto ticket holder who has walked away from claiming the prize, is an Iowa Lottery presentation to the House Government Oversight Committee on Tuesday.