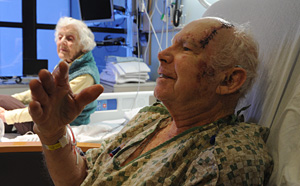 ANCHORAGE, Alaska — An agitated moose ran down and stomped a well-known Bush pilot from Willow, Alaska, but he was saved when his wife grabbed a shovel from their pickup truck and whacked the big animal until it backed off.

(PHOTO: George Murphy, sitting with his wife Dorothea Taylor at Providence Alaska Medical Center on Sunday, January 22, 2012, talks about how his wife saved his life after being attacked by a moose.)

George Murphy, 82, and his wife, Dorothea Taylor, 85, told the story of their recent moose encounter Sunday afternoon from Murphy’s hospital room in Anchorage, where he is recovering from gashes to his head and left leg as well as seven broken ribs.

They were at the Willow Airport around 10:30 a.m. Friday running their golden retrievers as they do almost every day. They drive along the access road in their truck and let the dogs, Fellar and King Tut, run on ahead.

When it came time to round up the dogs, Murphy told Taylor she could wait in the truck.

“Sometimes both of us go and walk the old dog back,” Taylor said. Fellar is 12 and moves slow. Tut, his son, is 3 and can run like the dickens. “But this time it was 30 below and just too darn cold out there.”

Murphy was hiking back to the truck with Fellar when he saw the moose up the road. As he first told the story, he referred to the ungulate as a bull but when he thought about it later, decided it must have been a cow. No matter. It was big, and stressed.

“He was way off. Jeez, he spotted me and he started to come right after me. So I was trying to get to the truck. But I didn’t make it,” Murphy said.

At the airport, there were no trees to duck behind. Murphy dove into the deep snow for protection. And the moose came at him.

“He started to stomp. Then he turned around and stomped again. And there was nothing I could do. I was afraid he was going to kill me.”

Murphy, a retired state construction engineer, flew for the Iditarod Trail Sled Dog Race nearly three decades, stopping only a couple of years ago. He once was the chief pilot for the race. He’s well known among both mushers and pilots as well as the news crews he carried to cover the race. He ran a flying service for a while and still has the 1948 Aeronica he bought back in 1966, when he first met Taylor in the then-new village of Port Lions, on Kodiak Island.

He and Taylor, a retired teacher, are both familiar with wild animals. They filled their freezer with moose and caribou until they gave up hunting a couple of years back. They’ve been married some 40 years.

From inside the truck, Taylor heard the dogs barking in alarm and jumped out to investigate. At 5 feet tall and 97 pounds, she is tiny but tough. Years ago, she shot and killed a trophy-size brown bear on Kodiak Island. The mount is on the wall of the home they built on 8 acres in Willow.

She saw the moose rear up and strike at something on the ground with its front hooves. She didn’t know that her husband was down or that the moose was stomping him. She couldn’t see him in the snow.

Tut was at the moose’s rear, barking and trying to nip its back legs. Fellar was standing near the moose’s front, barking like crazy too.

“I thought he was trying to kill Fellar, the old dog,” Taylor said.

Still unaware of the danger her husband was in, she yelled for him to come help her with the dogs.

On instinct, she ran to where the action was. “And the moose started after me.”

Taylor raced back to the truck but instead of jumping in for safety, she released the tailgate to look for something she could use. She grabbed a big grain shovel that they keep on hand to dig out if the truck gets stuck.

She walked back to the moose, making a racket with the shovel on the road, where the snow was hard-packed. She kept shouting for her husband to get over there and help.

Taylor took a swing at the moose and it backed off a little, but then it reared up and stomped its target again. It didn’t let up.

“So I kept hitting it some more,” Taylor said. She swung mainly at the rump but said she got in at least one good lick to the head. She knew she was too close but what could she do? Finally, the moose turned away.

“When it turned and started to go off slowly, I hit it with everything I had,” she said. Tut, the younger dog, took over and chased the moose away.

“Then I saw it wasn’t Fellar the moose was after at all. He was striking over the top of Fellar, to get George.”

Her husband was conscious and said he may have broken ribs. That was the least of it, she thought. Blood was spurting out of a deep crack in his head. The snow was crimson. She grabbed his Iditarod baseball cap, which had fallen off, and used it to try to stop the flow the blood.

She couldn’t get her husband up so she got the dogs in the truck and then ran for help.

She checked her pockets for her cellphone but couldn’t find it — she forgot it was in her purse, back in the truck. She dashed to the hangar for Denali Flying Service and hoped the owners were there.

“I jerked the door open and called ‘Help! Help!’’’ Barry Stanley came out and called 911.

Even then, Taylor thought her husband would die from the loss of blood. Anchorage was just too far away.

But help came in time. The Willow volunteer fire department got there and stabilized him. Murphy was then rushed by medical helicopter to Providence Alaska Medical Center.