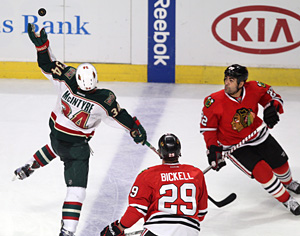 (PHOTO: The Minnesota Wild’s David McIntyre (34) catches a puck in front of the Chicago Blackhawks’ Jamal Mayers and Bryan Bickell (29) in the third period at the United Center in Chicago, Illinois on Thursday, January 12, 2012. Chicago won, 5-2.)

At the time, the Minnesota Wild, in desperate need of a scorer, was in the dressing room. All players would be present and accounted for when they returned for the second period.

By the time the third began though, you can bet Mike Yeo wished he could have pulled a few.

It wouldn’t have been for a Cammalleri trade. He and his $7 million cap hit went to Calgary. It would have been for astonishingly bad play in the second period as a 1-1 tie became a 4-1 deficit en route to a 5-2 Wild loss to the Chicago Blackhawks at the United Center.

Josh Harding, ill the past few days, was chased for Matt Hackett by the 16:27 mark. He was slow to react to shots, giving up three goals on eight shots in the second and four on 21 in the game.

Health, he said, was no excuse.

“That’s unacceptable by myself. I was awful out there,” Harding said. “Just an off night. Let the team down here. … I was pretty brutal.”

Greg Zanon and Clayton Stoner had a rough night. The defense pair was on the ice for three goals and played starring roles on Harding’s last two.

Zanon’s a 31-year-old, seven-year-pro. But continuing his recent refusal to talk about his individual play, Zanon said brusquely, “I’m not going to answer any of those questions about me and Stony.”

With a #FreeLundin campaign started on Twitter by fans baffled that Mike Lundin has been scratched in nine of the past 10 games, a game like Thursday could get Lundin unchained Saturday in St. Louis. That’s, of course, if Marco Scandella or Nate Prosser aren’t recalled first to aid the Wild’s suddenly unreliable blue line.

Devin Setoguchi, scratched against San Jose for missing a team meeting, got things started with his first goal since Nov. 30. But it went downhill after Andrew Shaw tied it five minutes later.

“First 10 minutes we got pucks deep and did good things,” Setoguchi said. “Then we kind of sat back and we weren’t urgent. Collectively, we weren’t playing the system the way we’re supposed to play.

“We pushed for a couple minutes at a time and then sat back for another 10.”

Frustrating, said Matt Cullen (minus-3), especially after the victory at San Jose Tuesday night. Dany Heatley had one shot; Mikko Koivu none.

“We just didn’t have, for some reason, the spark, the jump, to get it done,” Cullen said.

Yeo is tired of it. The Wild is 0-7-1 in its past eight on the road. The next three games and seven of the next nine are on the road.

“Let’s decide right now,” Yeo said. “We all talk about the playoffs, and that’s nice. But you don’t talk your way into the playoffs. This is when playoff teams are made — right now, when it’s hard.

“If we hope it’s going to be easy, it’s not going to happen. It’s time we decide, ‘Do we want to make this happen,’ and start doing it.”