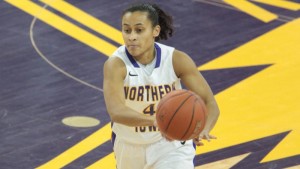 CEDAR FALLS, Iowa — Senior K.K. Armstrong scored 17 points and recorded her first career double-double on her way to passing the 1,000-point mark for her career, but the University of Northern Iowa women’s basketball team fell 68-62 against Indiana State on Thursday evening in the McLeod Center.

Armstrong notched career points No. 1,000 and 1,001 on a fast break jumper that pulled UNI to within three at 65-62 with 53 seconds remaining in the game. Indiana State got two defensive stops and drained three free throws to hold on for the victory.

Indiana State (10-6, 4-0 MVC) pulled into a tie with Wichita State for the Missouri Valley Conference lead with the win. The Sycamores were led by senior center Shannon Thomas, who scored a game-high 18 points and pulled down 14 rebounds. Indiana State shot 25-of-54 (46.3 percent) for the game, outpacing the Panthers’ 22-of-60 (36.7 percent) shooting effort.

Armstrong recorded 10 rebounds and five assists to go along with her 17 points. Senior Rachel Madrigal added 16 points on 7-of-11 shooting, eight rebounds, and a career-high five blocks. Senior Katelin Oney made three three-pointers on her way to 14 points.

For the first time this season, UNI lost a game in which it out-rebounded its opponent. The Panthers posted a 39-36 advantage on the glass against the Sycamores.

Indiana State opened the game with a 7-2 run and led by as many as nine points at 13-4, but UNI rallied back to tie the contest at 22-22 on an Oney three-pointer with 6:20 left before halftime. With the game tied at 24-24, the Sycamores put together a 9-1 run over the final four minutes of the half. Jessica Valley drained a three-pointer with nine seconds on the clock to set the halftime margin at 33-25.

UNI fell behind by as many as 16 points in the second half. With Indiana State leading 50-34 with 9:32 left in the game, UNI mounted a charge by outscoring the Sycamores 26-13 over the next eight and a half minutes. A three-pointer by Madrigal with 1:19 left pulled the Panthers to within three at 63-60. UNI and Indiana State traded buckets from Thomas and Armstrong to make it 65-62 with 53 seconds remaining.

The Panthers had a shot to tie after forcing a Sycamore turnover with 45 seconds left, but Oney’s three-point attempt was no good and Indiana State locked up the win with three free throws.

NOTES: K.K. Armstrong entered the game with 984 career points and scored 17 to join the 1,000-point club … Armstrong is the 21st player in UNI history to score more than 1,000 points … Armstrong reached 1,000 points with only 29 career starts – the previous low was 64 starts … UNI has now won 17 of its last 20 games played in the McLeod Center … Oney is now eighth all-time at UNI with 117 three-pointers in her career … Armstrong also moved into eighth on the UNI career list with 296 assists … with five blocks tonight to get to 63 in her career, Rachel Madrigal jumped into ninth place on the UNI all-time list.