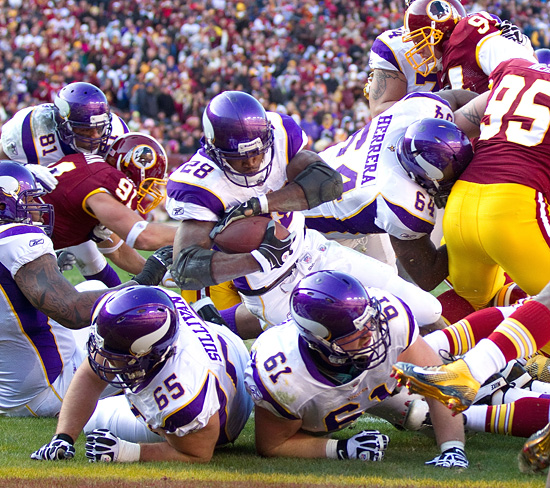 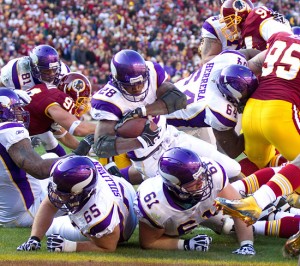 LANDOVER, Md. — In many ways, Christmas 2011 for the Minnesota Vikings should have been defined by an inspiring slogan, an 11-word adage delivered by Joe Webb from the postgame podium at FedEx Field.

(PHOTO: Minnesota Vikings running back Adrian Peterson (28) scores a touchdown against the Washington Redskins during the first half at FedEx Field in Landover, MD, Saturday, December 24, 2011.)

“Stay prepared,” Webb said. “And when your opportunity comes, take advantage of it.”

In a perfect world, Webb’s words would have been the neat way for the Vikings to package their 33-26 victory over the Washington Redskins, as the backup quarterback sparked a second-half eruption with three touchdowns.

Yet Webb was only a small part of the story. The far more significant scene from an otherwise pleasant Christmas Eve came on the first play after halftime. That’s when Adrian Peterson took a handoff from Christian Ponder and was drilled in the left knee by Redskins safety DeJon Gomes.

Peterson’s left leg was planted at the time and had little give. Instead, it bent sideways and left the Vikings’ superstar face down on the grass writhing in agony.

A magnetic resonance imaging exam Saturday night confirmed Peterson suffered a torn anterior cruciate ligament. That injury could keep Peterson from being available to the Vikings at the start of the 2012 season.

“Oh Lord,” Peterson said after the game, before he received the diagnosis. “I just knew something bad happened.”

Percy Harvin knew immediately Peterson was in trouble, promptly waving for the Vikings’ medical staff to rush out.

“You don’t ever want to see that,” Harvin said. “As soon as he went down, with the pain he was grimacing with, you know something was wrong. … I kind of (glanced at) his whole body, saw his leg and knew it was bad.”

Peterson seemed downright disconsolate as he stood on crutches and talked to reporters in the locker room after the game. Both he and the team were bracing for the worst. The Vikings said coach Leslie Frazier would give a further update on the injury Monday.

“Some people told me what they saw on TV and they said it looked pretty bad,” Frazier said immediately after the game. “I’m just hoping and praying it’s not what I’m being told.”

As if Peterson’s injury wasn’t bad enough, on the next play Ponder took a vicious shot to the head while being sacked by Adam Carriker and London Fletcher, producing concussion-like symptoms that ended the rookie quarterback’s day prematurely.

But this is where a woeful season — the Vikings (3-12) seemed to be in the hunt for the No. 1 overall draft choice if they lost their final two games and Indianapolis won next week — has its silver lining, however small it may be.

This was a lesson in patience, an uplifting moment for a 25-year-old reserve who seems to always respond when called upon.

This was a victory that ended a six-game losing streak and left the Vikings feeling encouraged as they headed home for the holidays, with a little satisfaction.

“This is not relief,” linebacker Chad Greenway said. “This is a celebration. It’s our third win and we’re excited about it no matter what anyone else thinks.”

The jubilation was mostly thanks to Webb, who for the second time in three weeks took over the Vikings’ huddle and injected it with all sorts of positive energy.

With Ponder out, Webb strutted into the huddle and turned up the energy. He rushed for 34 yards, including a nifty 9-yard scoring run in which he delivered an Xbox cutback past Reed Doughty. Webb also completed four of his five passes for 84 yards, including a 17-yard TD toss to tight end Kyle Rudolph and an 8-yarder to Harvin.

“Magic,” Harvin said. “Joe’s gifted. He’s one of those gifted players who does things you can’t describe.”

With Peterson down, Toby Gerhart responded as well, rushing for 109 yards on 11 carries. His 67-yard run, which came two plays before Webb’s scoring sprint, was the Vikings’ longest rush of the season.

To be clear, this was by no means a masterful performance. At times, the Washington offense seemed high-powered on the way to 397 total yards. Rookie Evan Royster rushed for 132 yards on 19 carries. Rex Grossman threw for 284 yards with two touchdown passes.

But despite a rash of shaky tackling, the defense also delivered a few big plays. Brian Robison’s strip sack of Grossman in the first quarter led to a 36-yard Ryan Longwell field goal.

Mistral Raymond, meanwhile, helped thwart Washington’s attempt to rally with an interception with 7:32 to play, the Vikings’ first pick in 76 days.

Peterson’s agony could have deflated this team, a group that has experienced a wide array of misfortune in 2011. Instead, the Vikings absorbed the adversity and dug deep.

“I think everybody just rallied,” Harvin said. “I know personally, what was going through my mind, I was like, ‘Just forget all this mess, man. Let’s go out and get this win no matter what it takes.’ I’m assuming that’s what the rest of the team was thinking.”