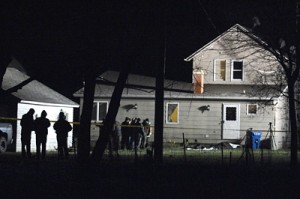 CHICAGO — A central Illinois mother was responsible for the chilling murder-suicide that claimed the lives of two adults and three children in tiny Emington, Ill., authorities confirmed Monday.

(PHOTO: A central Illinois mother was responsible for the chilling murder-suicide on Friday, December 16, 2011, that claimed the lives of two adults and three children in tiny Emington, Illinois, authorities confirmed Monday.)

“Sara McMeen was the sole shooter of all (four) victims before taking her own life,” Livingston County Sheriff Martin Meredith said.

On Monday, authorities offered new details that confirmed what neighbors said they witnessed: McMeen shot her children and took her own life in the open back yard of her home in the tiny, rural community about 90 miles southwest of Chicago. Warren was shot inside, police said. The gunfire started minutes after Skyler and Ian arrived home from school on the last day before Christmas break.

Autopsies determined the 10-month-old was shot twice in the head; her father, Warren, died of gunshot wounds to the back and to the neck; Skyler was shot twice in the head and once in the upper back and Ian was shot in the head, Livingston County Coroner Michael Burke said in a news release. McMeen died from a self-inflected gunshot wound to the neck, the release said. Police found the semi-automatic 40-caliber handgun next to her hand, according to the release.

Police said they still are investigating and would not offer details on a possible motive, though they are looking for anyone who spoke with McMeen or Warren before the shootings.

In the quiet community of about 100 people, residents created a memorial of wreaths and candles at the home on South Street, Emington Mayor Daniel Delaney said.

He said he hopes the town, which has a grain elevator, a church, a post office, a park and a dog-grooming business, doesn’t get a bad reputation.

“We’ve been working so hard on this little town to make it appealing to get people interested in coming here,” Delaney said.

A visitation for Warren and his daughter, Maggie, will be held Wednesday night at Fruland Funeral Home in Morris, Ill. Funeral services will be held Thursday morning at the funeral home.

Services for Ian and Skyler are Thursday afternoon at Emmanuel Lutheran Church in Dwight, Ill.

A visitation for McMeen will be held Wednesday morning at Hager Memorial Home in Dwight, and her funeral service will follow.