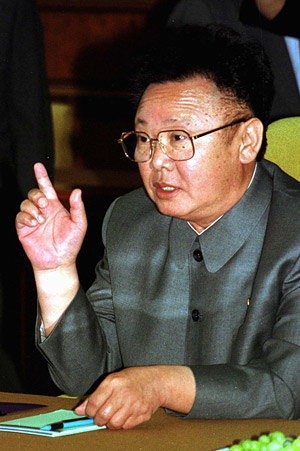 SEOUL, South Korea — World leaders weighed in Monday on the death of North Korean leader Kim Jong Il, with many expressing wary optimism that a new leader in the secretive regime provides an opportunity for a fresh diplomatic start.

(PHOTO: State television from the North Korean capital of Pyongyang has announced the death of Chairman Kim Jong Il. He was 69. In this file photo from 2000, North Korean leader Kim Jong Il speaks during the three-day summit.)

Kim, 69, reportedly died Saturday of a heart attack, the state-run media confirmed Monday. The “Dear Leader’s” youngest son, Kim Jong Un, has been handpicked to succeed his late father, but analysts predict that the smooth transfer of power depends on whether the younger Kim is accepted by the nation’s vaunted million-man army.

The White House on Monday released a statement saying it is monitoring the situation and is prepared to stand behind its allies in the region, South Korea and Japan.

Britain Foreign Secretary William Hague sounded a more hopeful note, saying that “this could be a turning point for North Korea.”

“We hope that their new leadership will recognize that engagement with the international community offers the best prospect of improving the lives of ordinary North Korean people,” Hague said in a statement. “We encourage North Korea to work for peace and security in the region and take the steps necessary to allow the resumption of the six-party talks on denuclearization of the Korean peninsula.”

Meanwhile, South Korea put its military on “high alert” as President Lee Myung-bak huddled with his national security council Monday. Lee later instructed South Korean citizens to “go about their business,” pledging their safety in the face of any unprovoked attacks.

Late Monday, the north reportedly fired a short range missile toward South Korea, but there were no reports of injuries.

Fujimura said Japan hoped Kim’s death would not affect the region adversely. “First of all we hope that this sudden development would not give adverse impact on the peace and stability of the Korean Peninsula,” he said.

Australia’s Foreign Minister Kevin Rudd said Kim’s death brings the situation to “one of those critical junctures” and “an exceptionally difficult period of transition.”

“It is critical that everybody exercises appropriate calm and restraint in what is an important development in terms of the overall stability of the region and the security of us all,” Rudd told reporters.

“This presents an opportunity for the North Korean regime, the new leadership of the new regime, to engage fully with the international community on the critical questions of how to feed their people, how to open their economy and, more broadly, how to deal with the long-standing problem of North Korea’s nuclear weapons.”

In China, North Korea’s longtime ally, Foreign Ministry spokesman Ma Zhaoxu called Kim a “great leader” and said China believes the North Korean people will “turn their grief into strength, unite as one, and continue to advance the cause of North Korean socialism.”

However, he stressed that Beijing would make “active contributions to peace and stability on the Korean peninsula and in this region.”

Ly added, “There will definitely be change, good and positive change. North Korea will work more closely with the global community toward the peace and stability of the Korean Peninsula.”

But most nations are taking a wait-and-see attitude.

“The death of a dictator is always a period of uncertainty for a dictatorship,” Swedish Foreign Minister Carl Bildt posted on Twitter. “And North Korea is the hardest dictatorship in our time.”