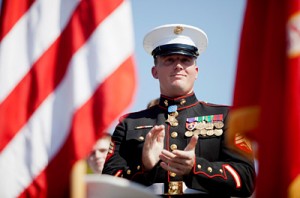 WASHINGTON — The White House and the Pentagon said Thursday that they wouldn’t investigate embellishments in the Marine Corps’ account of the actions that led to Marine Sgt. Dakota Meyer receiving the Medal of Honor.

A day after McClatchy Newspapers revealed errors and exaggerations in the Marines’ narrative of Meyer’s heroism in Afghanistan — many of which were repeated by President Barack Obama at the Sept. 15 medal ceremony — the Obama administration said that it stood by the narrative provided by the Marines. White House spokesman Jay Carney said that the Marines’ medal vetting process was “quite extensive and thorough.”

(PHOTO:Dakota Meyer, 23, attends the Cow Days parade in Greensburg, Kentucky, September 17th, 2011. While there is no dispute that Meyer merited the medal nomination, a three-month assessment by a McClatchy correspondent who survived the ambush found that the official narrative was grossly embellished.)

“The president was very proud to present the Medal of Honor to Sgt. Meyer,” Carney said. “He was that day and he remains proud today of his extraordinary service.”

The Pentagon also said it wouldn’t probe the Marines’ medal process, which inserted unsubstantiated claims into the official narrative of Meyer’s deeds after Obama approved him for the nation’s highest combat decoration in July, McClatchy found.

“There has been absolutely no discussion of an investigation,” said Doug Wilson, assistant secretary of defense for public affairs.

“The comments made yesterday and today by the White House completely reflect and reinforce our position: the process was followed according to the rules and Dakota Meyer is and remains an extremely deserving recipient of the Medal of Honor,” Wilson said.

Other survivors of a September 2009 ambush in eastern Afghanistan attested that Meyer was deserving of the U.S. military’s highest award for valor after he entered a remote valley to retrieve the bodies of four dead American service members. However, McClatchy found that sworn statements by Meyer and others in the battle show he didn’t save the lives of 13 U.S. service members, leave his vehicle to scoop up 24 Afghan soldiers on his first two rescue runs or lead the final push to retrieve the four dead Americans — claims promoted by the Marines’ public affairs office.

Carney said the president’s remarks that day were based on “extensive documentation” from the Department of Defense and the Marine Corps, including sworn testimony from Meyer and “others present at the scene.” White House staff also spoke with Meyer, Carney said.

Meyer, who has declined to discuss the matter with McClatchy, posted on his Twitter account: “I can’t thank everyone enough for the support people on twitter and other Americans are showing me. So Thank You all.”

On Capitol Hill, there was little public reaction to the McClatchy report, which noted that Meyer’s medal — approved in an unusually short time — was awarded as lawmakers and serving and former military officers have been pressing the Pentagon to award more top decorations because of the relatively few conferred in the wars in Afghanistan and Iraq.

Sen. Jim Webb, a Virginia Democrat and former Navy secretary, said he had “no doubt” that Meyer was “appropriately recognized” given the Marine Corps’ “long tradition of rigid standards and its thorough review process.”

“Out of respect for the obvious heroism of Sgt. Meyer, it is important that any discussion of this matter begin with this recognition,” said Webb, a member of the Senate Armed Services Committee.

The Marine Corps issued a statement late Wednesday saying that it was “personally very disappointed” with McClatchy’s decision to publish the report. It described the account of Meyer’s actions posted on its website as Meyer’s personal retelling of the incident, but it didn’t challenge any of the assertions made in the McClatchy investigation.

Instead, it appeared that some in the Marine Corps were resorting to personal attacks on the McClatchy reporter, senior national security correspondent Jonathan S. Landay, who was embedded with the U.S. military unit that was ambushed.

A senior Marine Corps spokesman, Stewart Upton, posted a comment late Wednesday on the website of the McClatchy Washington Bureau saying that Landay “left the battlefield during the fight.” Landay, who was pinned down with several American personnel for about 90 minutes and helped carry a wounded Army soldier to safety, escaped the ambush along with the Americans after U.S. helicopters arrived on the scene.

(Nancy A. Youssef and Halimah Abdullah of the Washington bureau contributed.)