City takes Myhre off CES project lead; Weaver banned from talking to her 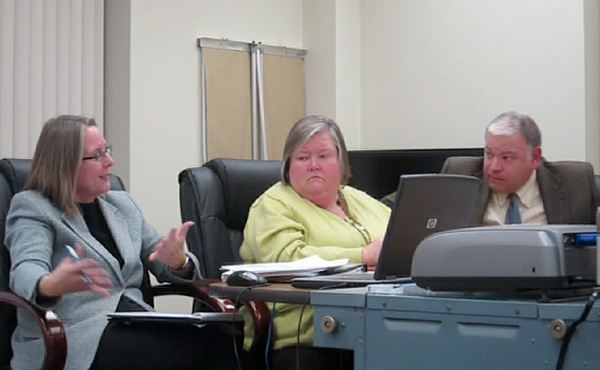 Mason City officials have changed course in their strategy to win the approval of a waste to energy plant.

Growth and Development Director Pam Myhre has been removed as the lead on the proposed Creative Energy Systems project, and she has been ordered not to talk to City Councilman Max Weaver without City Administrator Brent Trout present.

“Pam has been removed as lead on the project,” Trout said. “She is still assisting Tricia (Sandahl) in handling the project.”

Myhre, in October, postponed putting the CES project on the Mason City Zoning Board of Administration’s agenda, citing that there was not enough information on the project. Then, in November and December, the ZBA rebuffed CES’s postponed a decision for a conditional use permit. At the December 6th meeting, Myhre explained in detail to the board the “health contingencies'” objections to the project.

Also on Friday, Max Weaver, who represents Mason City as an At-Large Councilman until the end of December, told NorthIowaToday.com that he is now banned from speaking with Myhre.

Trout confirmed that Weaver cannot speak to Myhre, at least “not without me present,” Trout said. “Based on how the project (CES) has been going. That’s the requirements I put on it.”

Weaver pulled no punches when asked about the muzzle Trout has placed on him, and the removal of Myhre as the lead on the CES project.

“I heard Mayor Bookmeyer ordered Brent Trout to remove Pam off the ERS (project) and also had Trout ban me from meeting with her one on one,” Weaver said. “Now look who the real bully is,” Weaver said of Bookmeyer. “Ms. Myhre was doing an excellent job. I’m very concerned with her replacement.”

CES project opponents weighed in on the latest developments at City Hall.

Carol Patnode of Mason City said “I think Pam Myhre has done a reasonable and fair job in this case, and for her to be removed raised another red flag for me. Pam Myhre was removed from the lead position of managing the flow of information to the ZBA as well as chairing future ZBA meetings.  She has basically been silenced.  When government attempts to eliminate different voices in the political process in an effort to control the flow of information – that sends up a red flag which should make people question the process.”

JoAnn Hardy of Mason City said “I was very sorry to see Pam Myhre removed from the controversial CES project. She is very professional and knowledgeable and she has been working to protect the environment and the safety of the citizens of Mason City.”

Others expressed dismay and confusion as to why Myhre was removed from her role in the project for the city.

“You have to ask yourself why,” said Cindy Connor of Mason City. “Is it because she (Pam) was the only satff person to present though-provoking information? That’s what I saw at each meeting. I saw how Brent Trout glared at her when she brought up health concerns and how Tricia Sandahl rolled her eyes.”

Katy Voet of Mason City said “When I first heard of Pam’s removal, I was shocked. Then after some thought, I became appalled. I mean, how unethical can they get? (Trout, Bookmeyer, and North Iowa Corridor Director Brent Willett) Everyone says we should get involved with our government. Well I did and I’m so disappointed. Who can we trust at City Hall?


City Administrator Brent Trout looked anything but amused on December 6th as Growth and Development Director Pam Myhre explained to the ZBA Board the “health contingent’s” side of the story regarding the possible CES waste to energy plant. Did she go too far?

Video of Pam Myhre explaining the “health contingencies'” objections and concerns to the ZBA board: