This news story was published on April 11, 2011.
Advertise on NIT • Subscribe to NIT

MASON CITY – Mason City City Council member Don Nelson told the North Iowa Corridor Executive Committee (EDC) in a letter that the City Council’s rejection of affirming funding for the organization “was nothing more than four City Council members’ attempt to have me change my position on the Micro Enterprise Initiative, this is not going to happen.”

At an April 5th City Council meeting, the Council had before them an opportunity to give a non-binding approval for funding for the EDC for the next three years. Non-binding means that the vote obligates no future council to give any amount of money to the EDC; it is simply a show of support.

However, Council member Janet Solberg made a motion to postpone the vote for two months, and Scott Tornquist seconded the motion. Solberg likened the situation to a meal, saying of enticing businesses to come to North Iowa “let’s give them an appetizer, main meal and dessert.”

“The actions of the council was nothing more than ‘deal-making,’ an attempt to sway me,” Nelson said. 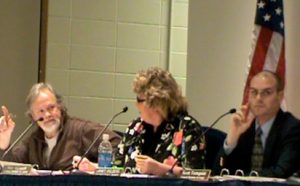 Council member Scott Tornquist said of the vote during the discussion that “It’s all a show, anyway.” He went on to say that “I will never support this until we put micro-enterprise in place.”

Speaking to the EDC contingent in the audience, who seemed very interested in the discussion taking place, Council member Max Weaver said “I can’t tell you when you’ve had a success. It’s pretty ballsy of you to come here and ask for more money. There’s a lot of organizations that would like a commitment from us. Little league would like a commitment from us. I’m your swing vote. We’re logrolling.”