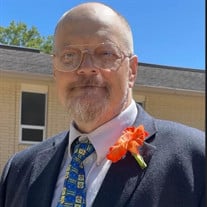 Larry V. Stange, 62, of Mason City, passed away unexpectedly on Tuesday, November 29, 2022 at his home in Mason City with some of his loved ones at his side.

Larry V. Stange, 62, of Mason City, passed away unexpectedly on Tuesday, November 29, 2022 at his home in Mason City with some of his loved ones at his side.

A funeral service will be held 10:00 am Saturday, December 3, 2022, at The Church of Jesus Christ of Latter-day Saints, 1309 S. Kentucky Ave, Mason City, IA with Bishop Hammond officiating. Burial will be in Memorial Park Cemetery.

Visitation will be held Friday evening, December 2, 2022 at Hogan Bremer Moore Colonial Chapel, 126 3rd St NE, Mason City from 5:00 pm until 7:00 pm and will resume one hour prior to Larry’s service at the Church.

Larry was born October 11, 1960 in Charles City, the son of John and Mary (McCauley) Stange. He grew up near Rockford and graduated from Rockford High School among the class of 1980.

On March 13, 1982 he was united in marriage to Kozette Elbert in Mason City and their marriage was sealed in the Chicago Temple on June 20, 1991. Together they would grow their family to include children, Samuel, Odessa, and Sophia. In 1989 the family adopted David and Abebi. He was a loving and caring father and grandfather and was often thought of as the best.

Larry was a faithful member of The Church of Jesus Christ of Latter-day Saints and was baptized in Salt Lake City in 1983. Larry held testimony of his Lord and Savior Jesus Christ until his final day.

From the time he was 14 years old Larry held a variety of jobs. Most recently he worked as a personal support professional and Med Aide at Opportunity Village in Clear Lake prior to his retirement.

Larry enjoyed watching movies and attending concerts with his daughter, Odessa. He enjoyed a love for books, reading, and guns. He was a member of the Mason City Gun Club. Many hours were spent watching cooking shows and he enjoyed going out to eat with his family. He loved spoiling his grandchildren at every opportunity.