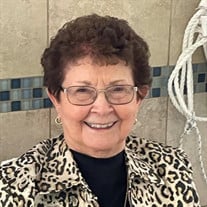 Lorraine McCurry passed away on November 22, 2022, surrounded by family. Funeral services are pending.

Lorraine McCurry passed away on November 22, 2022, surrounded by family. Funeral services are pending.

Lorraine was born in Algona, Iowa on January 28, 1931 to William and Ann (Pfeffer) Green. She would later be joined by three younger sisters and six younger brothers. She graduated from Algona High School in 1948.

Lorraine was united in marriage to Jerry McCurry on January 24, 1951 in Corwith, Iowa. After spending a few of their early years of marriage stationed at Camp Roberts, California, where Jerry served in the Army and Lorraine managed the base general store, they settled in Humboldt, Iowa, where they raised their three children and were active members of the St. Mary’s Parish.

Lorraine was always a busy bee. If she wasn’t cleaning (her favorite activity, whether she would admit it or not), you could find her at Mass, walking her four mile loop around Humboldt with her daughter Kim, riding her bike with her grandkids, chatting on the phone with one of her many siblings, traveling with Jerry, catching up with the local ladies at the EZ Trim or having “coffee” (half French toast and bacon) with the neighborhood women at the Family Table.

Lorraine also leaves behind two brothers, Wayne Green of Arab, Alabama and Elmer (aka Tom) Green of Marble Rock, Iowa, and many nieces, nephews and other family members.

Lorraine was preceded in death by her beloved husband, Jerry, in 2011, and is certainly enjoying being reunited with him for eternity. Lorraine was also preceded in death by her parents, her three sisters, Gloria (Daryl) Arend, Darlene (Ron) Kadlecik, and Jeanne (Jim) Cink, four of her brothers, William (aka Billy) Green Jr., Terry Green, Gary Green, and Darrell Green, and several nieces and nephews.