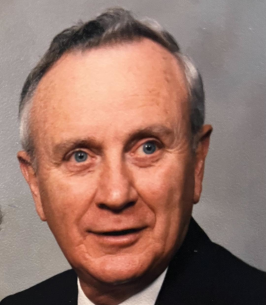 Glenn Lawrence Long, the son of Christopher and Marguerite (Strayer) Long, was born on August 29, 1925, in Rural Kossuth County. He died on Sunday, July 10, 2022, at Dow Rummel Village, in Sioux Falls, SD at the age of 96 years.

He graduated from Algona High School before attending and graduating from AIB. Glenn farmed until 1960 when he began working as an Accountant and CPA. He retired in 1991.

Glenn married the love of his life, Annabelle Gronbach on September 22, 1948. The couple made their home in Algona until they moved to Des Moines for a short time. After finishing their education, they relocated to Estherville in 1963. In June of 2019 Glenn and Annabelle moved to Sioux Falls to be closer to their family.

He was a member of Immanuel Lutheran Church in Estherville where he held several offices.

In Glenn’s free time, he enjoyed fishing, reading and spending time with his grandchildren. He also enjoyed singing familiar hymns and songs of his youth. Dow Rummel staff and residents were accustomed to Glenn filling the halls with his favorite songs.