UNI women’s basketball falls to Drake in the second round of the WNIT, 62-55

DES MOINES – The UNI women’s basketball team 2021-2022 season came to a close in the WNIT Round of 32 with a loss to the Drake Bulldogs.

It was a back and forth contest through three quarters but a low shooting average in the fourth quarter would be the end of the road for the Panthers. UNI ends the 2021-2022 season with a 23-11 record and an appearance in the MVC Hoops in the Heartland championship game.

The Panthers would win the tipoff but would wait to tie the game up 58 seconds into the quarter. UNI would have a seven-point run over two minutes to jump out to an early five-point lead. The next basket wouldn’t be made for over two minutes as the Bulldogs cut the lead with a three. The Panthers would score another four points out of the media timeout for their largest lead of the game at six with just under three minutes in the first. The teams would trade shots to end the quarter with UNI taking a two-point advantage into the second.

For the first five minutes of the second, it would be a back and forth battle of one-point leads. Drake would break the lead changes with a second-chance layup at the 4:40 mark to go on a six-point run. The Panthers would end the run with a Cynthia Wolf three-point jump shot. Karli Rucker would add a jump shot in the paint to tie the game back up. A minute and a half later, Wolf would make another trey to put UNI up by two. Drake would get a chance at the line with a minute 17 to go to again make it a tie game heading into halftime.

Both teams struggled to score to start the third quarter. Nicole Kroeger would break the tie a minute and a half in with a jump shot off a Bulldog turnover. Drake would make three straight shots to retake the lead but the Panthers would break out on a six-point run to go back up by four. The Bulldogs would answer with a four-point run to tie it back up. Two more ties would occur in the final two and a half minutes. Rucker would get the last shot of the third, making a jump shot to put UNI back up by two.

The Panthers struggled to find baskets in the fourth quarter as Drake used a 9-0 run to take the final lead of the game. UNI wouldn’t get their first points of the final frame until Wolf made a jump shot just inside the arc with four minutes to go in the game. The Panthers would get eleven more points in the final four minutes, but it wouldn’t be enough to overcome the lead the Bulldogs built up early in the quarter. UNI would see their run in the WNIT end to Drake in a 62-55 loss.

The Panthers had their lowest field goal percentage of the season on Monday night, making only 22-72 (30.6%) of shots. The one shooting area where UNI excelled was the free-throw line, where they were a perfect six of six for the third time in the 2021-2022 season. The Panthers had 41 rebounds with seven steals and seven blocks.

Junior Kam Finley led UNI in scoring with 11 points while Karli Rucker and Grace Boffeli had 10 points each. Boffeli also led the team in rebounds with 13 for her ninth double-double of the season. Freshman Maya McDermott along with Boffeli led the team in steals with two apiece.

Monday’s game was the final for seniors Karli Rucker, Nicole Kroeger, and Bre Gunnels. Rucker ends her career with 1869 points to be second in all-time scoring in the program along with being UNI’s program assist leader with 512 assists along with several other accolades. Rucker and fellow senior Kroeger lead the program in career games played with 159 appearances over five seasons. Gunnels ends her career with the second-most blocked shots in Panther history with 159 blocks. 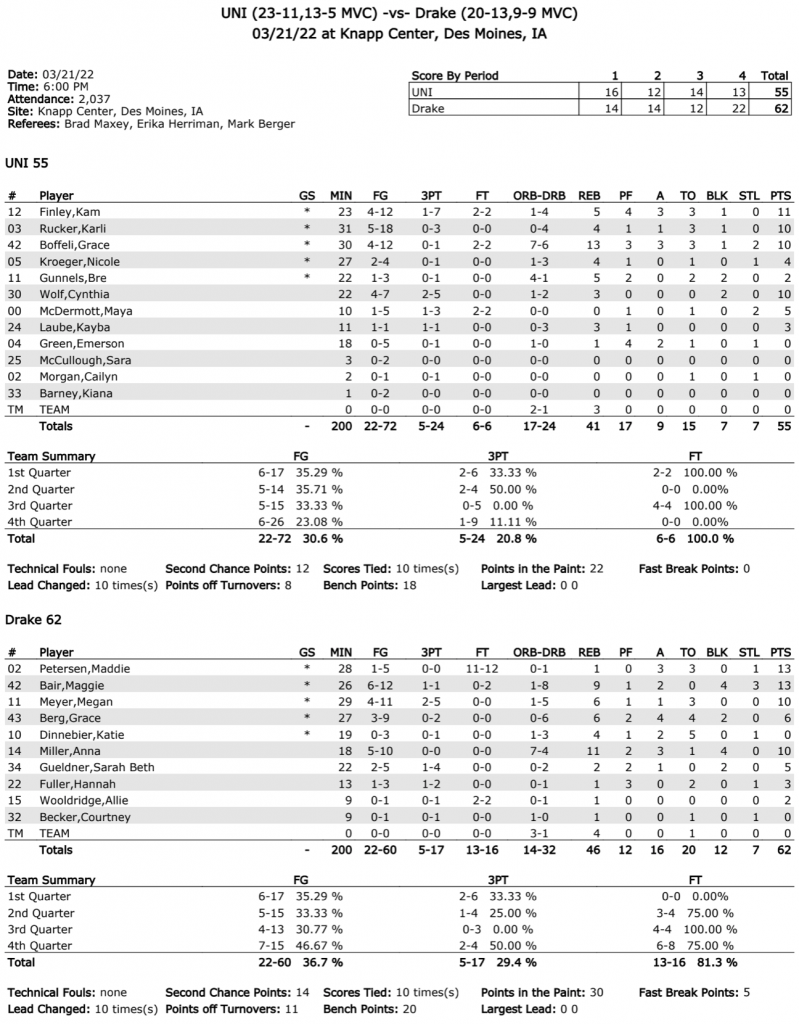