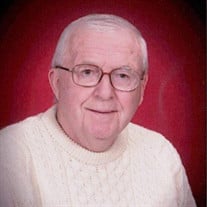 Visitation will be held Friday morning from 9:00 am until 10:30 am at Holy Family.

In lieu of flowers, memorials may be left in Al’s honor to Epiphany Parish or the Mason City Public Library.

The son of Albert and Elizabeth (Keating) Libby, Albert William Libby Jr., was born on Friday, January 13, 1939 in Olean, New York. He was the eldest of four children, growing up alongside two sisters and a brother. Al attended Olean High School, graduating in 1957. Following high school he joined the United States Navy where he served as a medical corpsman until his honorable discharge in 1961.

Al enrolled in the University of Chicago Hospital and Clinics School of Inhalation Therapy to become what was later known as a respiratory therapist. Following graduation he moved to Gary, Indiana where he would meet his wife of 56 years, Myra Hunter. The couple was married on August 21, 1965 in Gary and would be blessed with three children, Christopher, Alicia, and Joseph.

In years past Al was a member of the American Legion, the Moose Lodge, Boy Scouts of America and the Eagle Scouts Review Board, 4th Degree Knights of Columbus, and DAV. Al also enjoyed spending time at Lime Creek Nature Center, Community Kitchen, Mason City Senior Citizens Center, North Iowa Humane Society, and was an active member of Epiphany Parish where he served as a Eucharistic Minister to the homebound and an RCIA sponsor.

Al is preceded in death by his parents, Albert and Betty Libby; mother and father in law, Joseph and Nellie Hunter; and two sisters, Rita Griffith and Mary McAffee; and brother in law, Tom Hunter.