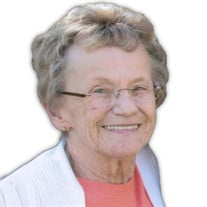 Virginia “Ginny” Kay DeWitt was born March 25, 1945 in Mason City, the daughter of Lloyd Bernard and Jean Elaine Elizabeth (Miller) McMurray. Growing up on a farm outside of Mason City, Ginny attended country school before graduating from Mason City High School in 1963. On November 5, 1963 she married the love of her life, David DeWitt, at Wesley Methodist Church in Mason City. They were blessed with two sons, Leland and Bernard and made their home around the country following David’s military service until they were able to plant their roots back in North Iowa. Ginny continued her education at Hamilton Business College, earning a degree in bookkeeping. For many years the couple ran a DX Service Station in Mason City and later Ginny worked for Principal Financial for many years before retiring.

Over the years, Ginny and Dave enjoyed square dancing the night away together. She was a talented seamstress and took pride in sewing her own dresses and dancing attire. For many years she helped support the 1133rd Transportation Company while David served. Most of all, Virginia loved her family and cherished time spent with all of them. Her grandchildren and great-grandchildren brought her great joy and she looked forward to watching them grow each and every day.