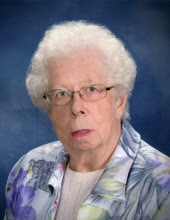 A private graveside service will be held at a later date in the Memorial Park Cemetery in Bethlehem, Pennsylvania.

Harriet Tonkins was born on April 5, 1929, in Bethlehem, Pennsylvania to parents Frederick and Imgard (Apple) Haag. Harriet attended Liberty High School and upon graduating she attended St. Luke’s School of Nursing where she earned her nursing degree. Later on in life she went back to college attending Cedar Crest earning her bachelor’s degree. Harriet worked as a nurse for her whole career serving patients at the St. Luke’s Hospital. Harriet met her soon to be husband Harold who happened to be an ambulance driver working for St. Luke’s Hospital. On February 24, 1962, the couple were united in marriage.

In her free time Harriet enjoyed traveling, taking numerous trips overseas exploring different countries with her friends. When at home she enjoyed tending to her yard, gardening, playing cards and spending time with her dog.

She was preceded in death by her parents and her husband.