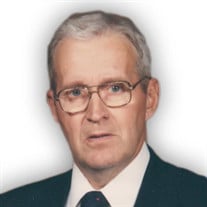 Funeral Services will be held 11:00 a.m. Wednesday, January 19, 2022 at Bethel United Methodist Church, 503 S East St, Manly, with Rev. Cory Allard officiating. He will be laid to rest in the Manly Cemetery.

Visitation and public viewing will be held one hour prior to the service at the church.

Memorials may be directed to the Manly Care Center.

Kenneth George Benjegerdes was born July 27, 1927 near Manly, the son of Emil and Martha (Troester) Benjegerdes. He attended Manly High School and on November 26, 1950 married the love of his life, Ruth Jewett at St. Pauls Evangelical and Reformed Church. The couple was blessed with five children: Steven, Karen, Marian, Barbara and Gary who were all raised on the family farm outside of Manly. Kenneth dedicated his life to the farm: raising livestock, including cattle, pigs, and chickens over the years. He and Ruth cared for a large, bountiful garden, and took pride in utilizing their harvest. Kenneth could often be found working on his own machinery, and was quite mechanically inclined. Though often quite reserved, he enjoyed passing on his skills and lessons to his children.

Kenneth and Ruth were longtime members of Bethel United Methodist Church. In 1990, the Benjegerdes farm was honored as a Century Farm, an accomplishment Kenneth took great pride in. His heart was poured into the family farm, and even when he moved to the care center to be with his wife, memories of the farm life brought him joy. Most of all Kenneth cherished time spent with his children, grandchildren and great-grandchildren.

Preceding him in death are his parents, Emil and Martha; brother, Irvin; and sister, Marcella Klemp.