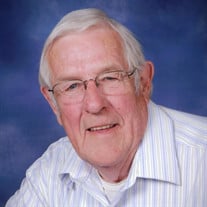 Funeral Services will be held 10:30 a.m. Monday, December 13, 2021 at the First Presbyterian Church, 201 Willowbrook Drive with Rev. Paul Collier officiating. He will be laid to rest at Memorial Park Cemetery, Mason City, IA.

In lieu of flowers, memorials may be directed to the First Presbyterian Church in Bob’s honor.

Robert Jerome Lind was born June 29, 1938 in Kandiyohi, MN the son of Andrew and Myrtle (Carlson) Lind. After graduating from Willmar High School, he married Ruth Blomquist in 1957 and the couple was blessed with four children: Rick, Patti, Steve and Kurt. The family made their home in Mason City, and the couple later separated. For many years Bob operated Bob’s Gulf Gas Station, later working as a Terminal Manager for Dahleen and then the Standard Gas Station. In his retirement Bob drove school bus for the Mason City Schools and looked forward to taking the kids to their sporting events.

Over the years Bob enjoyed the outdoors and camping trips. Along with his companion, Gwen, the two looked forward to time spent with their friends. He was a longtime Hawkeye fan and looked forward to watching the Mohawks play all over the area. For many years Bob was a member of the River City Barber Shop Chorus. Bob lived his life on his terms and took each day at its fullest. He was a longtime member of First Presbyterian Church in Mason City.