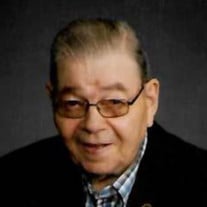 A funeral service will be held at 1:00 p.m. with a one hour prior visitation on Saturday, December 4, 2021 at St John Evangelical Lutheran Church in Charles City. Reverend Russ Leeper will be officiating. Burial will follow the service at Riverside Cemetery in Charles City.

Herb was born on May 29, 1935 in Blairsburg, IA to Herbert and Wilhelma (Wagner) Hinz. He attended Britt schools and graduated from Britt High School. On November 21, 1954, he was united in marriage to Vera (Anderson) and to their union, five children were born. Herb and Vera started their life together in Britt where Herb was a cattle and crops farmer. They later farmed in Thompson, Woden, Riceville and lastly Charles City. Herb also worked various other side jobs at Winnebago and the Co-Op in Charles City. Herb was an extremely hard worker; he absolutely loved farming and John Deere tractors. He instilled how important work ethic is to his children; they all helped with chores on the farm growing up. Herb was the leader and patriarch of his family. Anytime he said, “Get in the car,” Vera or their children knew they were about to go for a fun ride, although the destination was usually unknown. Herb and Vera enjoyed their weekend trips together and their drives along the fields, rivers and trees.

Herb was a strong-willed man but could also be a bit of a jokester. He believed in treating others the way you would like to be treated. Herb was a member of St John Lutheran Church and ushered at the church for years. He loved music and especially enjoyed the congregational singing at church. Sometimes Herb would sing songs to his own tune; which is a fond memory his family will carry. Herb left behind a legacy of farming, faith and family.

He was preceded in death by his parents; sister, Clara Richardson and sister in infancy, Linda Hinz.

In expression of sympathy, memorials may be made to St John Lutheran Church.