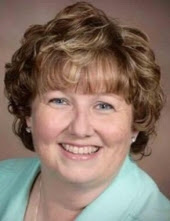 A funeral Mass for Suzanne “Sue” Gebel will be held at 10:30 a.m. on Saturday, December 4, 2021 at Immaculate Conception Catholic Church in Charles City with Reverend Gary Mayer celebrating the Mass. The funeral Mass will be live streamed on the Immaculate Conception Catholic Church Facebook page. Burial will follow at Calvary Cemetery in Charles City.

A visitation will be held from 4:00 to 8:00 p.m. on Friday, December 3, 2021 at Immaculate Conception Catholic Church in Charles City and continue one hour prior to the Mass on Saturday.

Suzanne Marie Gebel, the daughter of James and Mary Colleen (Welch) Gebel, was born on May 30, 1966 in Charles City. She attended Immaculate Conception Elementary School and graduated from Charles City High School in 1984. Sue received her Bachelor of Arts degree from Iowa State University in 1988 where she studied journalism and mass communication. In 2013, she received her Certified Association Executive (CAE) credential from the American Society of Association Executives. Shortly after graduating from ISU, Suzanne began her career as an Associate Executive Director for the Iowa Association of Community Providers. In September 2004, she became the Executive Director for the Iowa Funeral Directors Association (IFDA). For the last 17 years, Suzanne dedicated her life to promoting and supporting funeral service excellence. She had a passion for educating and advocating for the funeral profession, which included lobbying efforts in Washington D.C.

Suzanne served on two boards for IFDA – Board of Governors and Funeral Services of Iowa. She was a member of the National Funeral Directors Association and the Iowa State University Alumni Association. Suzanne was honored to be elected by her peers as Chairman of the Council of Funeral Association Executives. Suzanne was passionate about the impact of non-profit organizations, and led multiple other non-profits in strategic planning and team building to help ensure their success. Sue’s faith was very important to her, being a committed member of St. Francis of Assisi Catholic Church in West Des Moines and Immaculate Conception Catholic Church in Charles City.

Sue was an avid Iowa State Cyclones fan, and would follow them at home and on the road. Not including the numerous memories made in Ames, one of the fondest was traveling with ‘her boys’ to the NCAA basketball tournament in Milwaukee. Sue loved to travel, especially with her nieces and nephews. In fact, she took each of them, individually, to Washington D.C. for their own special trip. Sue loved shopping with ‘her girls’, including multiple trips to Florida to shop with her sister, Beth. Christmas was always a special holiday for Sue, and following in her mother’s footsteps, would make sure all her niece’s and nephew’s ‘lists’ were fulfilled. Aunt Sue never missed an opportunity, camera in hand, to take part in her niece’s and nephew’s activities.

Sue’s favored traveling was to warm destinations, and especially Marco Island, FL, where she enjoyed the beautiful sunsets with her various travel companions. Sue traveled on a pilgrimage with IC Church to Italy, where she was Lector at Mass at the Basilica of St. Francis in Assisi. Her pilgrimage was also highlighted by celebrating Mass at St. Peter’s Basilica where Cardinal John Henry Newman, Sister Mariam Thresia, Sister Giuseppina Vannini, Sister Dulce Lopes Pontes, and Marguerite Bays were proclaimed Saints by Pope Francis.

Above everything in Sue’s life, family came first, and she looked for and treasured every opportunity to be with any of her loved family members.

Sue was preceded in death by her parents, Jim and Colleen Gebel; brother in infancy, Joseph; maternal grandparents Ray and Rita (Ryan) Welch and paternal grandparents Louis and Marie (Kolbet) Gebel; and uncle, Don Gebel.
In honor of and in keeping with Suzanne’s wishes, in lieu of flowers, memorials may be given to the IC Youth Activities Fund (106 Chapel Lane, Charles City, IA 50616) and the IFDA Scholarship Fund (1454 30th Street, Suite 204, West Des Moines, IA 50266).