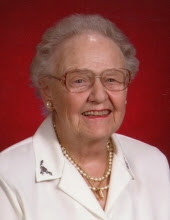 Visitation will be held one hour prior to services at Major Erickson Funeral Home on Wednesday.

Mary Helen Alverson, the daughter of Otis and Helen (Trout) Norris, was born April 4, 1929 in Mason City. She graduated from Hubbard High School in 1948. Mary Helen had a beautiful voice and studied under Helen Thalman for four years. She shared her talent singing at many funerals over the years. On October 31, 1948 she was married to Orville Alverson at the Congregational Church in Iowa Falls. They made their home on a farm north of Popejoy where they farmed and raised their three children. Besides helping on the farm, Mary Helen was active in her community as a 4-H leader, Rainbow Advisor and Worthy Matron for Eastern Star three times. At First United Methodist Church in Popejoy she was president of the United Methodist Women for five years and taught Sunday school for 17years. Mary Helen had a lovely vegetable garden on the farm and enjoyed learning about and appreciating the bright flowers in her flower garden and their scientific names. In 1996 they retired from farming and in 2004 moved to Mason City. She was not only a reader, but also enjoyed crossword puzzles and collecting antique glassware. She treasured friends from their couples 500 card club which they participated in for 50 years. Family gatherings were always special and Mary Helen was known for her cherry and apple pies.

She was a member of Wesley United Methodist Church in Mason City.

She was preceded in death by her parents; a son-in-law, Bob Wolvers; and a brother-in-law, Jon Wright.

This kind, loving, and spunky lady with lovely blue eyes will surely be missed.